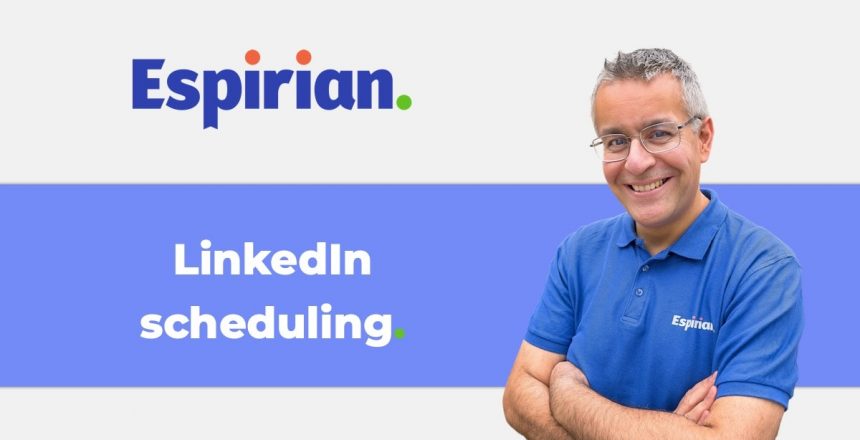 Does scheduling reduce visibility and engagement on LinkedIn posts?

I gave up using a third-party scheduling tool at the start of 2017, when I decided to focus on building my LinkedIn presence.

This experiment tests whether scheduling LinkedIn posts has any negative effect on the visibility or engagement potential of that content.

The use of third-party scheduling tools has no negative impact on the visibility or engagement potential of scheduled LinkedIn posts.

Throughout January 2021, I used third-party scheduling tools to publish all of the posts on my LinkedIn personal feed.

My aim was to look for any negative impact on the visibility or engagement on my posts.

To be consistent, I scheduled each post to go out at 8.40am.

I’ll look at the results further down the post. First, here are the posts that made up the experiment.

Here are my LinkedIn posts for the first half of January 2021, when I was scheduling via Buffer:

And here are the posts for the second half of January, when I was scheduling via Paiger:

I wondered about how best to make a fair comparison of my data for this test, to see whether scheduling my content resulted in any change in the performance of my posts.

So, let’s look at the average engagement stats for the first of those periods, when I was doing no scheduling.

And here are the stats for the second period, when I was scheduling in January 2021.

My scheduled content performed easily as well as it would have done if I’d posted it manually – even better, in fact.

Side note: the average figures for Jan 2021 are a fair bit lower than for Jan 2020, which seems consistent with many anecdotal reports I’ve heard about people’s post performance dropping during the Covid pandemic.

I wasn’t surprised that scheduling posts didn’t cause a negative impact, because of a conversation with Darren Westall of Paiger.

Darren told me that LinkedIn changed their rules in late 2020 so that all scheduling tools would need to use the same API (application programming interface) to post content to LinkedIn.

Crucially, LinkedIn would treat such incoming scheduled content as though it were the same as content posted natively/manually on the platform.

In other words, scheduling content should cause no negative impact on views or engagement.

Well over a year ago we migrated to LinkedIn’s latest UGC API that promised to match the experience users receive if they share direct on the platform.

They’re continuing to add support and feature parity for schedulers, most notably, giving us the ability to schedule video natively to company pages.

While all types of posts aren’t currently available, the ones that are act exactly the same as if you were sharing directly on LinkedIn and we look forward to adding support for all post types the moment LinkedIn add them to the API.

By testing this independently, I hope my results might give those cynics some reassurance that Darren was actually right. (Of course, you might decide that someone’s paying me to say that. Shout out to the conspiracy theorists!)

While conducting the experiment, I was contacted by Veronika Froncova and Ondrej Dlask of urban mobility startup Mileus.

They recently conducted their own experiment on scheduling tools and shared their results with me, which I publish below with their permission.

While my test focused only on personal feed posts, Veronika and Ondrej’s test covered personal and company page posts.

Our analysis seems to confirm that using a third-party scheduling tool does not have a negative impact on the organic visibility of our content.

While there was no significant performance change in case of our company page, we did see a slight decrease in reach on the personal profile.

This may have rather been a result of the twice higher publishing frequency in the “scheduling” period – and compared to the “no scheduling” period posts, half of the scheduled posts had similar reach, with the other half having less views, which skewed the average downwards.

We did not find evidence of the negative impact of third-party scheduling tools on post performance.

What can’t you do with scheduling tools?

But does that mean you ought to schedule your content? Well, maybe. It depends on whether you’re put off by some of the limitations that follow.

Using a scheduling tool means there’s some stuff you can’t do on LinkedIn:

One big problem with scheduling tools is that you can’t tag individuals via LinkedIn’s @mention system.

This means that tagging would need to be done after your posts are published, by editing each post and manually tagging the people in question. Though this works, it rather dilutes the value of scheduling the content in the first instance.

According to Ellie Clegg – a commenter on a recent LinkedIn post of mine about scheduling tools – it is possible to tag companies in Hootsuite.

I must admit that I didn’t like the Hootsuite user interface when I last used it, so I decided to exclude it from this experiment.

(This is one of the joys of doing this stuff independently – I’m not sponsored or otherwise in anyone’s pocket.)

Document posts (or carousel posts, as they’re sometimes called) are my most popular type of post, so it sucks not to be able to schedule such content.

I’ve written about this category of posts in How to post documents on LinkedIn.

Poll posts are a quick and easy way to gather feedback from your audience. This is another content type that isn’t currently supported by third-party scheduling tools. Boo!

You can see some sample results from one of my LinkedIn polls in my article LinkedIn weekend posting.

Scheduling tools can share only a single image with each post, so there’s no way of sharing a gallery of images (which isn’t the same as a document/carousel post).

I never put multiple images into a post so I’m not bothered by this limitation.

When you add an image to a LinkedIn post, you’re prompted to specify the “alt text” that accompanies the post.

Scheduling tools don’t allow you to specify this alt text. While this might not matter to most users, it’s not great for those who want to maximise the accessibility of their content.

You can edit your scheduled posts after they’re published, to insert the alt text. Again, this feels like a pain and reduces the value of having scheduled the content.

By “native”, I mean a video that’s uploaded direct to LinkedIn rather than being shared from an external source such as YouTube.

Most scheduling tools can’t deliver native videos to LinkedIn, which means you can’t get the same sorts of stats as when uploading that content manually. However, you can schedule and natively upload videos to LinkedIn company pages via tools including Paiger and AgoraPulse.

Vimeo Pro users can post Vimeo videos to their LinkedIn company page as though those videos were native videos. I’d use this feature all the time if it were possible to share such content to my LinkedIn personal feed.

Scheduling tools work only for sharing short-form LinkedIn posts (up to 3000 characters) in the feed.

There’s no way to schedule articles or newsletters to be published in the same way, though you can include a link to an existing article or newsletter in a scheduled post.

Scheduling tools are used to publish posts rather than comments.

Paiger lets you define an automatic first comment to go along with your LinkedIn post, and I haven’t seen that feature offered by any other scheduling tool. (Note that Paiger offers much more than scheduling, so it’s not fair to categorise it alongside Buffer, Hootsuite and other similar tools.)

Scheduling tools will let you share posts to your personal feed or company page but you can’t place those posts into any of the groups you belong to.

Arguably, the biggest thing that scheduling fails on is that its “set and forget” nature means that you might not go and interact with comments and shares of your content.

If you want to maximise the visibility of your LinkedIn posts, it’s important to create content that prompts people to comment and also for you to respond to those comments in a timely manner.

The delayed nature of publication means that scheduling also puts you at risk of putting out content that isn’t appropriate given whatever is happening in the news at the moment.

Thankfully, tools such as Buffer let you easily pause all scheduled content should the need arise.

My experiment indicates that scheduling tools cause no negative impact on the visibility or engagement potential of my LinkedIn posts.

So, I plan to post my text posts and image posts via scheduling tools from now on, unless I need to tag people – and even then, a quick edit of the published post could sort this out.

Because scheduling tools don’t do a good job of handling other content types, I’ll continue to post those natively on LinkedIn.

Are you going to start using third-party scheduling tools now that you know they don’t negatively impact the visibility of your posts on LinkedIn?