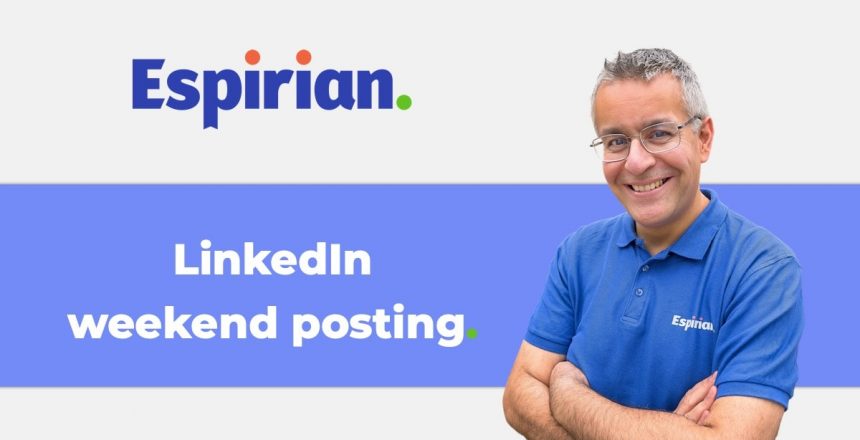 When is the best time to post on LinkedIn?

I’m often asked what days of the week and times are best to post on LinkedIn.

I’ve found that weekends work well for me, so I decided to ask my audience how active they were on LinkedIn on weekends.

Here are the results of my December 2020 poll about weekend activity, which attracted 1254 votes: 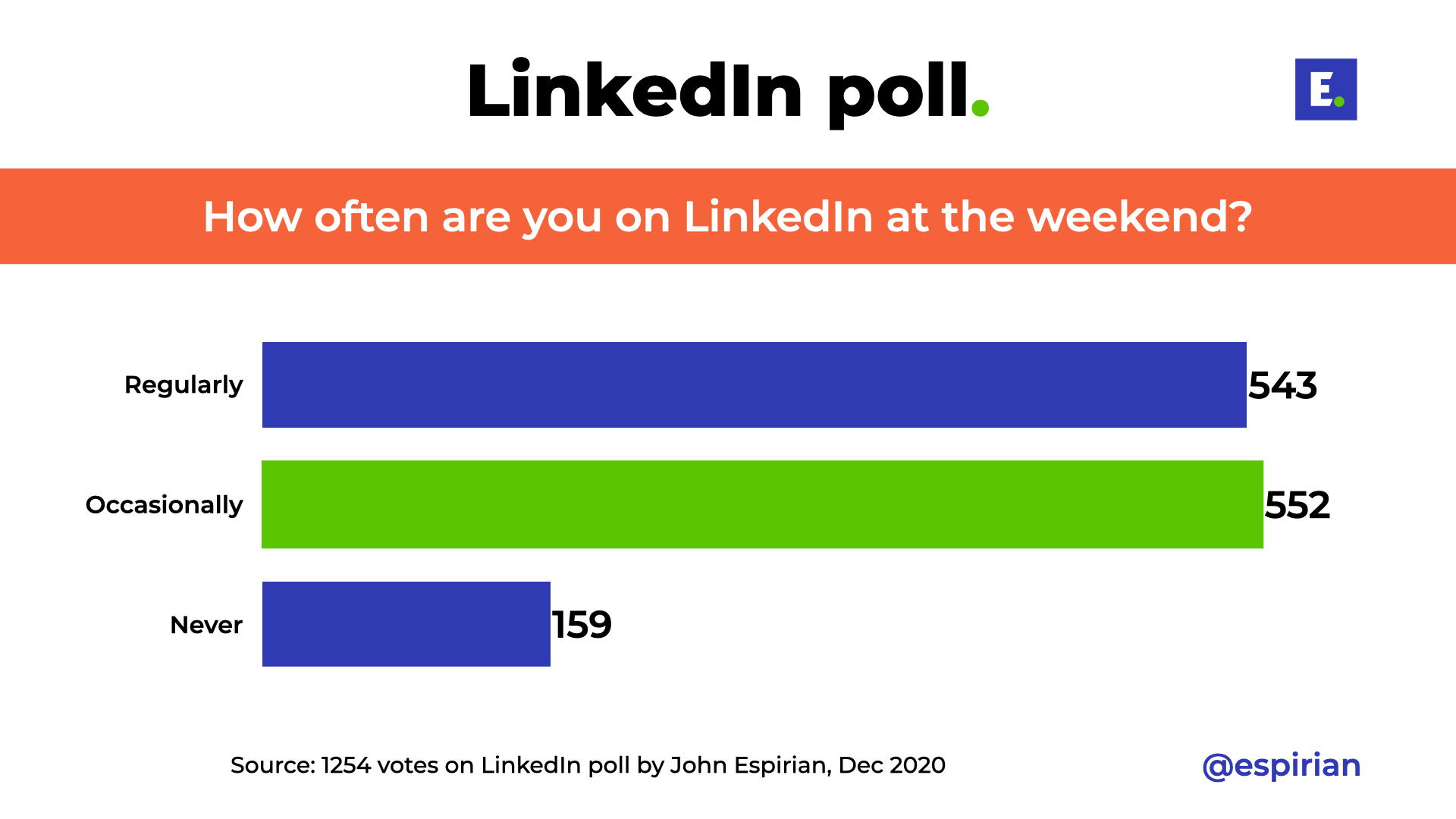 It makes sense if I look at my stats in detail.

If we break that down visually, it’s clear to see how well my content performs on weekends. Take a look at the following graphs, which show the stats ordered by: 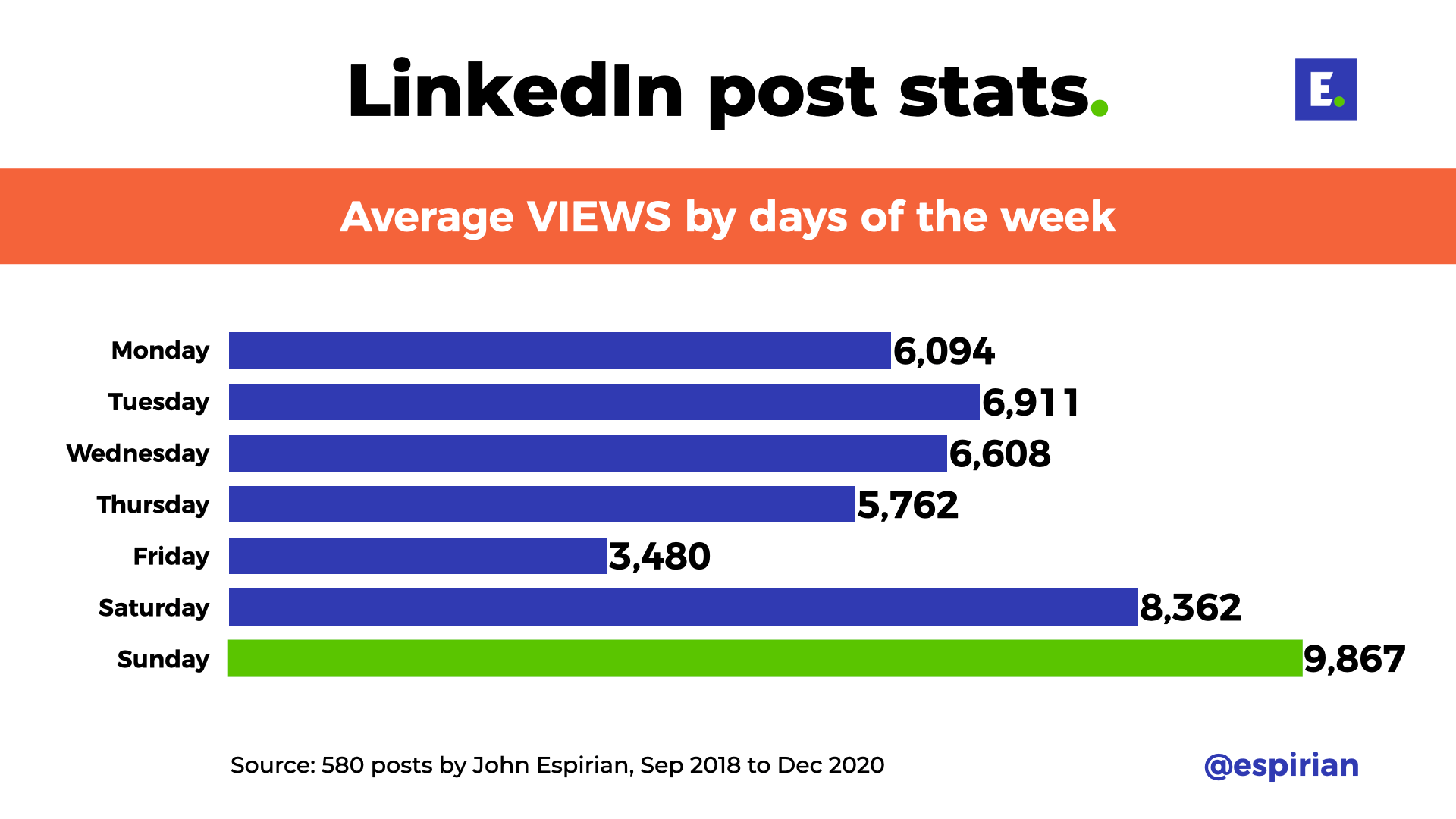 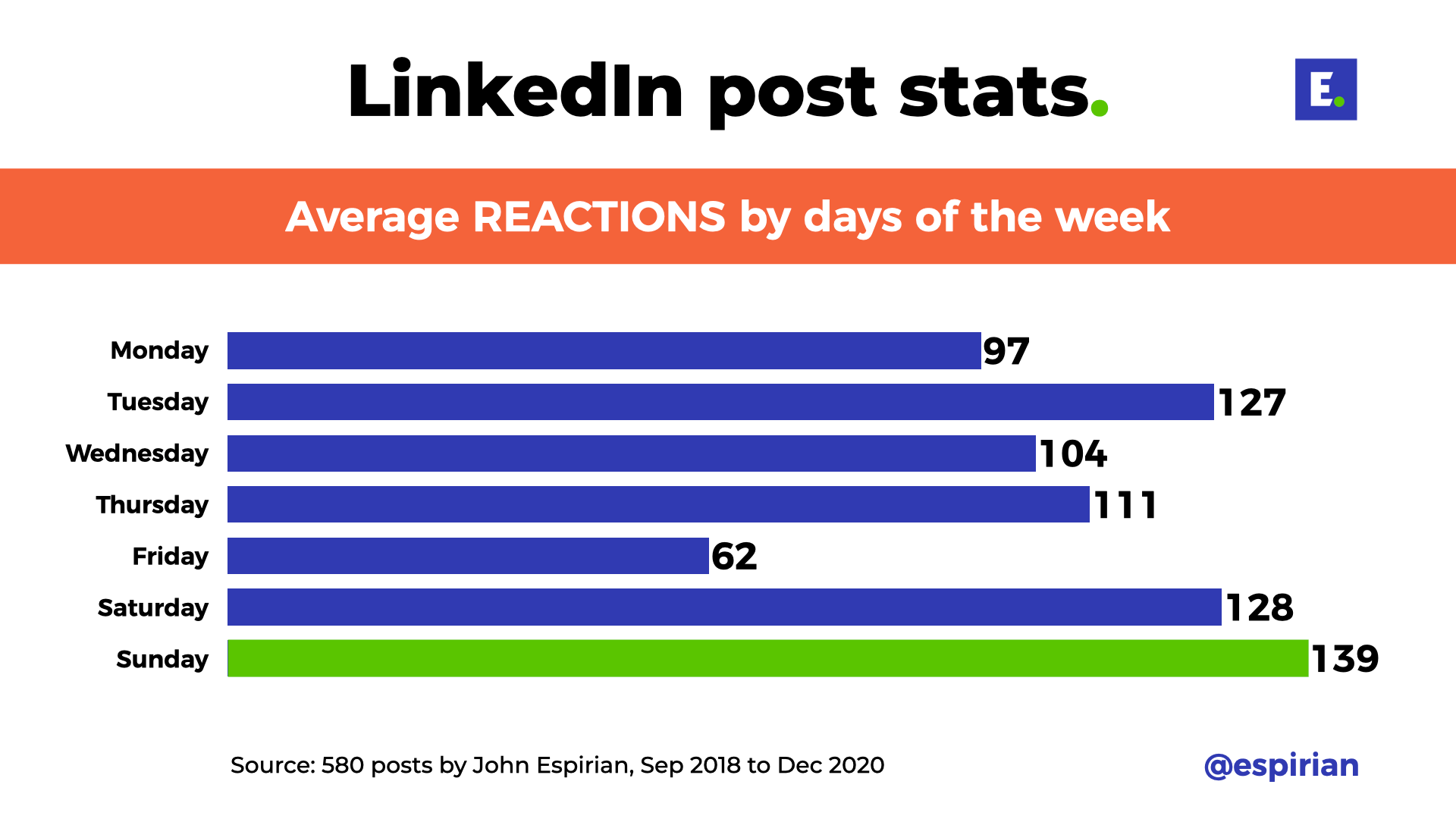 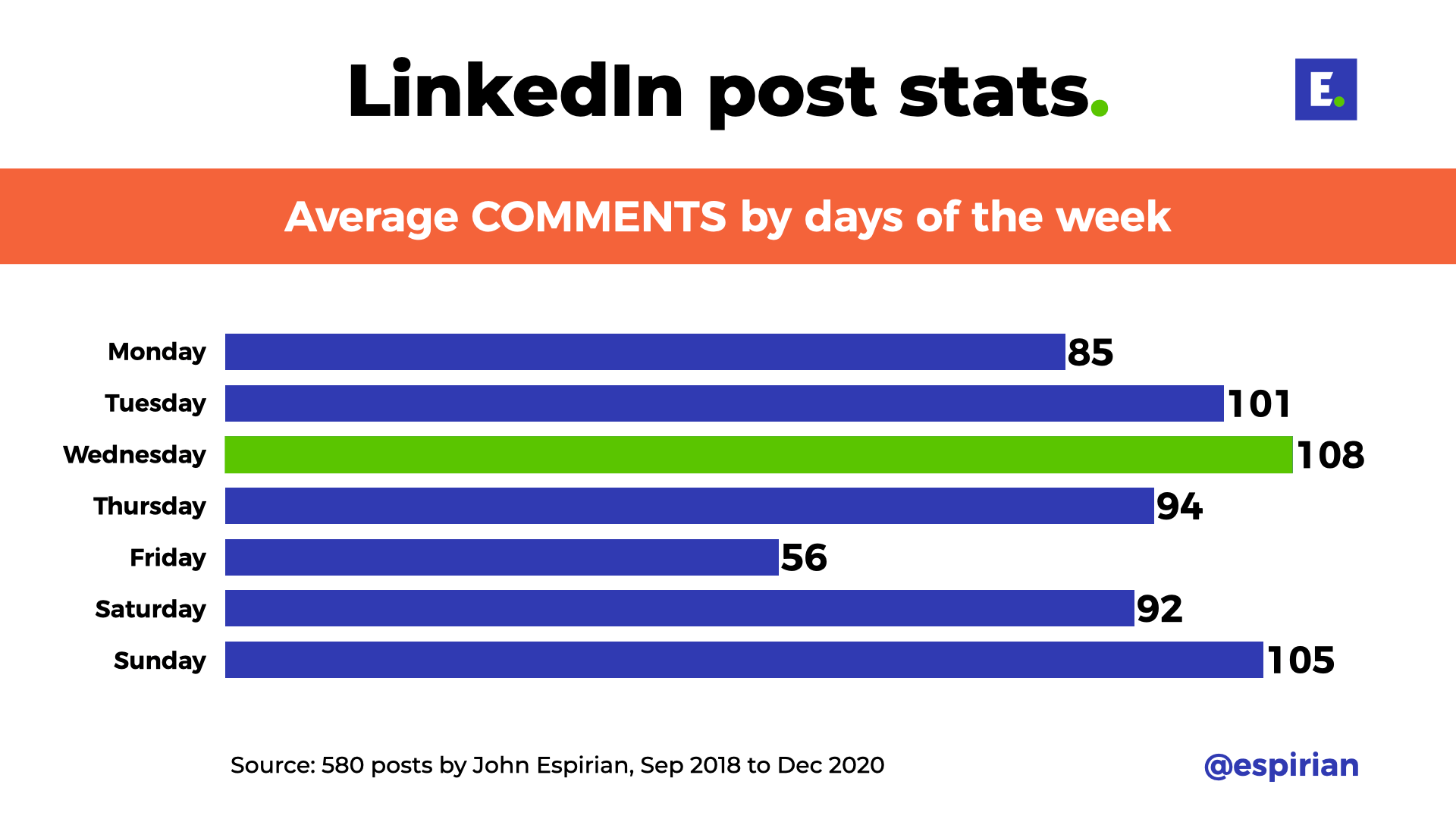 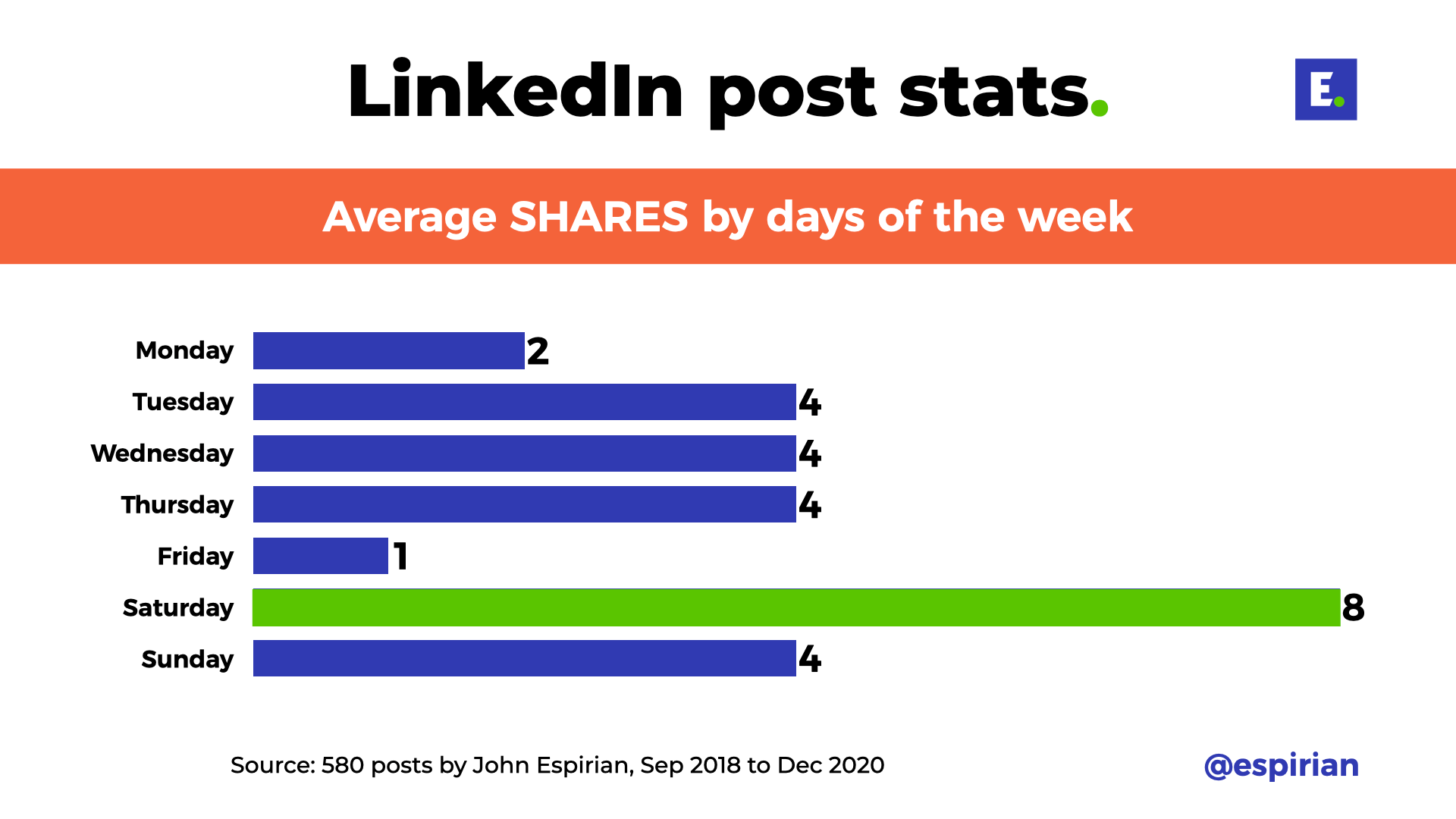 My stats show that – for me – Saturdays and Sundays are my best days for posting, while Fridays are my worst day.

The heightened activity on Fridays is a consequence of publishing my #FridayShout posts, which I’ve done consistently since mid 2018.

These aren’t as popular as my usual tips and explainer content, hence the view counts for Fridays are lower than average.

The cold-hearted analyst might look at this and decide to dump the #FridayShout – but there’s no chance of that. It’s an important part of my Content DNA to keep doing this. Consistency and congruence, always.

My #FridayShout posts alone aren’t enough to explain the differences in my view counts. It seems more likely that people are generally less likely to be in a mood to engage with business content on a Friday.

I think my posts perform best on the weekend because there’s less competition for attention, and people have more time to consume and comment on posts.

Because commenting is the best accelerant for content visibility on LinkedIn, that means that weekend posts perform the best for me.

This goes against a lot of the received wisdom about social media, which suggests that we should post during weekdays. 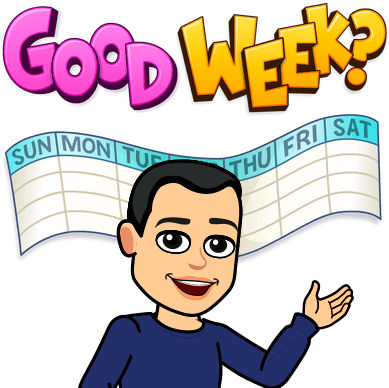 Not only that but also we’re often told to post at specific times, and many social companies and bloggers have written guides about the best time to post on each platform.

Note that since the introduction of dwell time metrics to the LinkedIn algorithm in early 2020, posts can perform well even when the early engagement isn’t good.

This means that the exact time of posting doesn’t matter as much as it used to. And I don’t think it ever mattered that much to begin with.

Post at a specific time of day ONLY if you know that your audience is in a particular time zone or will be active at a certain time, e.g. during the morning commute.

My broader opinion is this:

My poll about weekend usage was inspired by this recent one by SHIELD, which also suggests that a lot of LinkedIn users are online at the weekend: 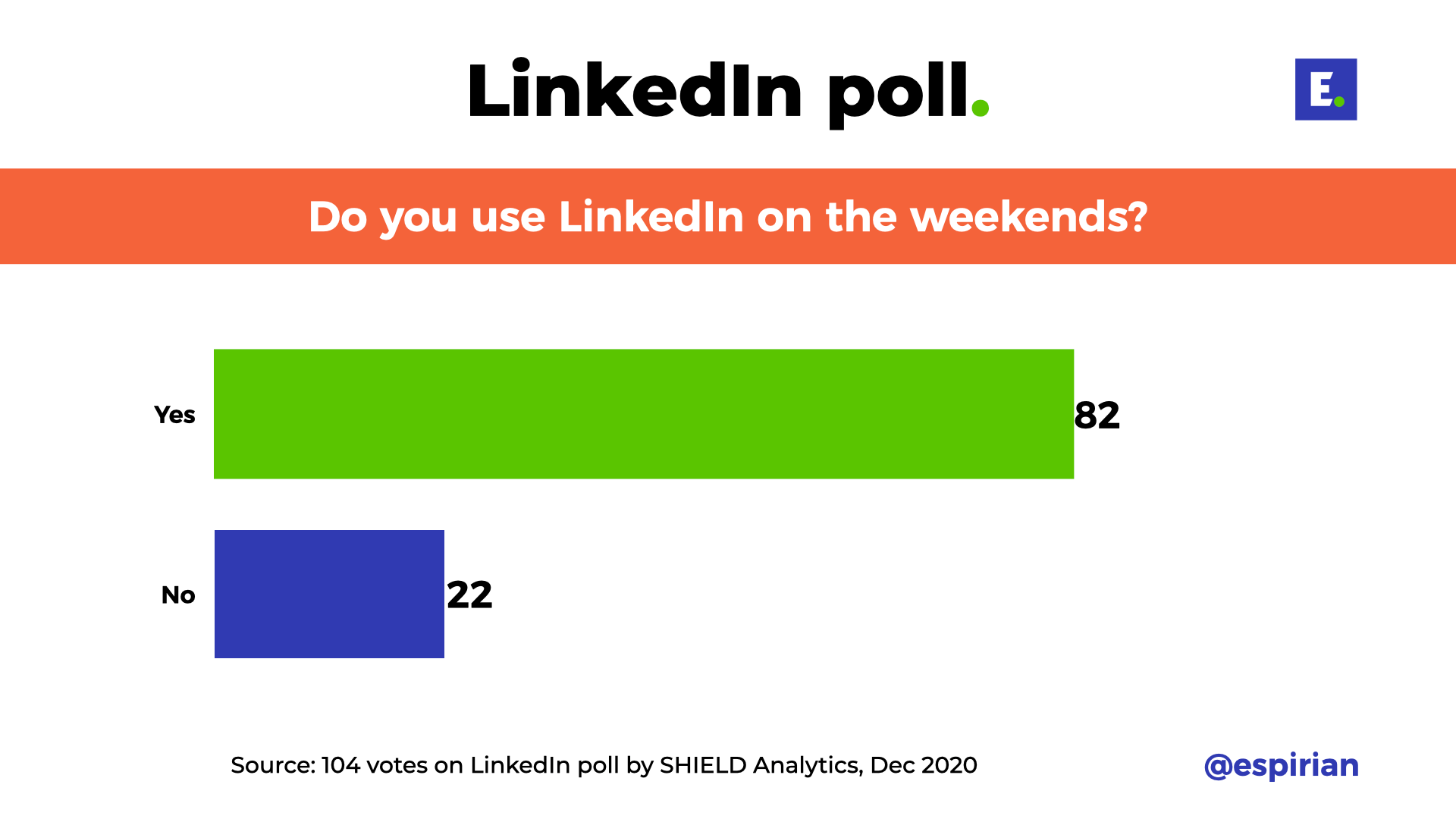 The poll size (104 people) is too small for the result to be considered significant on its own, but the data gives some mild support for what I’m saying above.

An April 2021 poll by Joel Lalgee gives a lot of support to the popularity of posting on LinkedIn on weekends:

In 2020, Liam Darmody had more than 7.2 million views on his LinkedIn posts. (My posts had 1.6 million views in the same period.)

Liam kindly shared his daily breakdown percentages with me, which are shown below.

His stats show a different profile than mine, but note that Liam received most comments on Saturdays – and remember that comments are the most valuable type of engagement for generating more visibility. 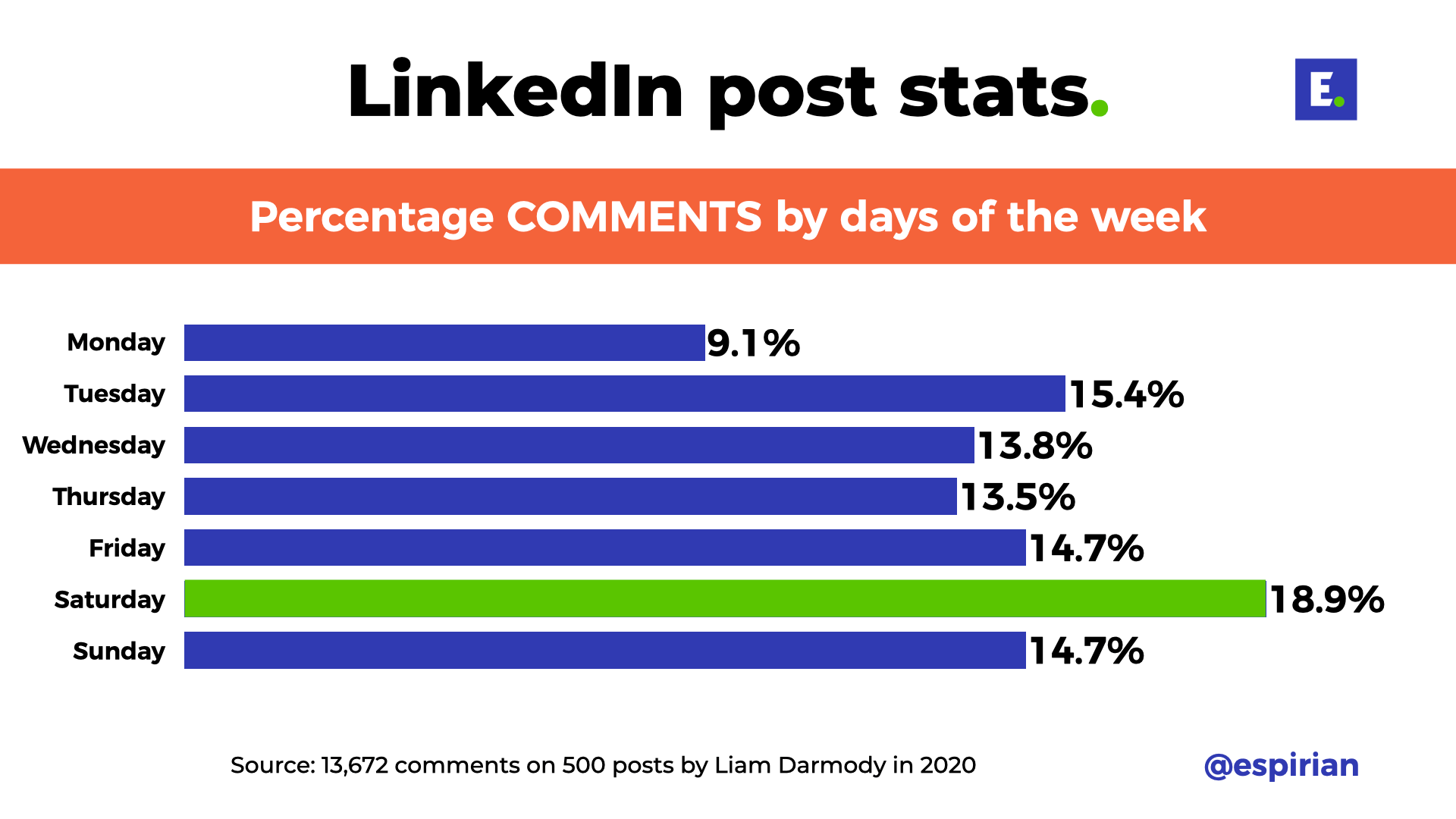 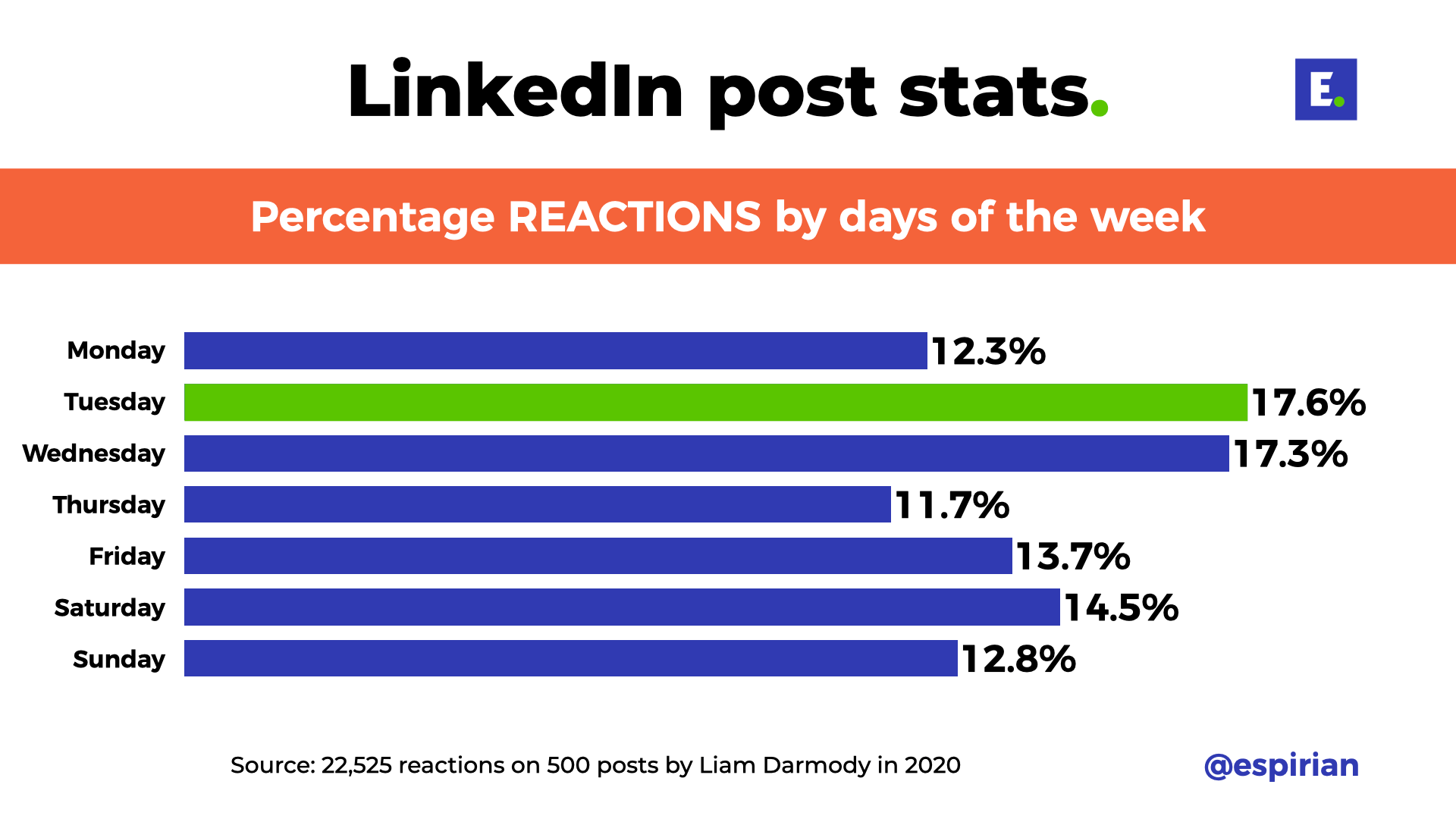 A note of caution.

A few commenters on my poll pointed out that the large proportion (87%) who reported that they use LinkedIn occasionally or regularly on weekends might have been smaller had the poll been conducted when we weren’t in the midst of a pandemic.

Perhaps I ought to run the poll again in a year’s time, when everything’s back to normal (*nervous laugh*).

My data goes back more than a couple of years and that means I can be confident in stating that weekend posting works well for me.

I always recommend that you do your own tests to see what works for you.

Go to shieldapp.ai?via=john and use code JOHNESPIRIAN15 to get a 15% discount on your first year of SHIELD Analytics.

I use SHIELD for all my LinkedIn analytics!