How I handle LinkedIn invitations. 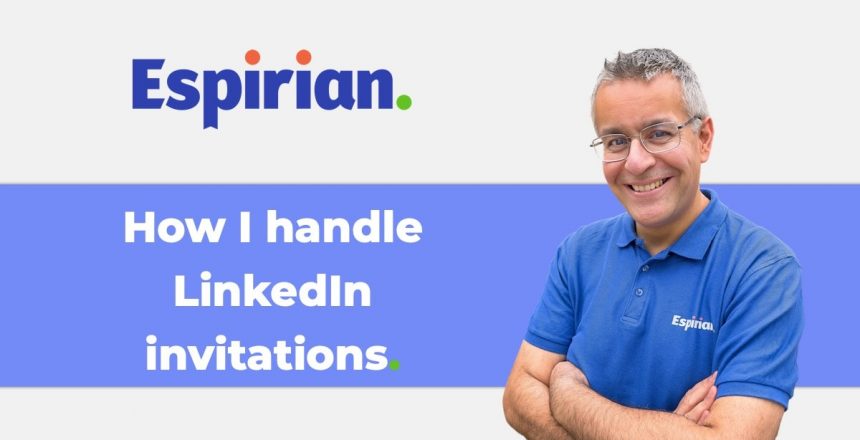 As my LinkedIn network has grown, I’ve changed my approach to accepting invitations to connect.

I now reject most invitations I receive, in large part because so many of them arrive without a note.

This article sets out how I’m handling invitations as of late 2021.

Do you connect with anyone?

My LinkedIn network is not a numbers game, and I try to be mindful about who I connect with.

At the time of writing, I have 8500 connections.

LinkedIn allows a maximum of 30,000 connections, so you might think that there’s no point in worrying about who I connect with, as there’s plenty of space to fill.

But if you don’t curate your network, you’ll end up with a load of irrelevant connections who probably won’t give you much long-term value and who you probably won’t be able to serve well either. 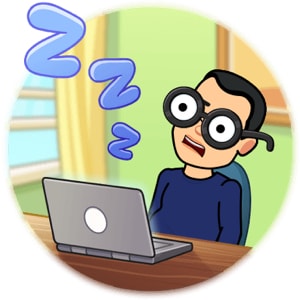 Side note: I avoid connecting with anyone who is a LION (LinkedIn Open Networker). They’ll connect with anyone. No thanks.

Connecting with and following the right people.

I have 3 reasons for connecting with or following someone on LinkedIn:

If someone doesn’t fit into one of those categories, I don’t have a good reason to follow them.

I might still have reason to connect with them – perhaps they’re a nice person and I want to be able to direct message them – but that doesn’t mean I have to follow them.

I’m not making a value judgement on the people I don’t follow.

It’s just not possible for me to give attention to everyone I might know on LinkedIn, and so by curating my feed to follow only the people who are delivering on the categories above, I give myself the best chance of seeing something relevant when I scroll my home feed.

Despite being quite strict about this, I still see a lot of low-value content in my feed.

It would help if the Mute feature worked (this lets you hide posts by nominated people who you’re not connected with and don’t follow), but sadly this seems to be broken for me. I reported it to LinkedIn support and they weren’t very helpful. I haven’t seen others complain about this, so I think it’s an issue with my account only.

Do you accept generic or empty invitations?

In my November 2020 experiment, I found that 71% of all incoming invitations were completely empty.

As the receiver, I’m given the unwanted time burden of working out whether I ought to accept the invitation.

To accept all such invitations feels totally wrong.

It’s as though you’re at a networking meeting and someone has placed their business card in your hand without saying a word. 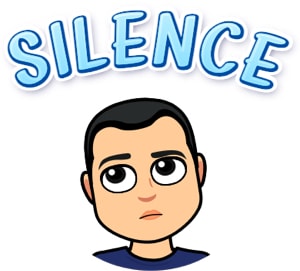 What’s worse, they haven’t provided any indication of whether they want to have a conversation.

I make this point in my book, Content DNA. Here’s a relevant snippet as read by Claire M Davis as part of my recent community read project:

My LinkedIn account has been in follow first mode since October 2018, meaning that non-connections who visit my profile will see the Follow button instead of the Connect button.

As a content creator, I want people to follow me, get to know my work and then connect with me. I find that this slow-burn approach leads to better relationships. (This is also part of the connection strategy I discuss in the LinkedIn Leaders Playbook.)

When someone tries to connect and doesn’t send an invitation note, I know that they’ve consciously ignored the prompt to follow me and have chosen to connect. It feels odd that someone would do that and then still not send a note with their invitation.

(Strictly speaking, the person might have been following me already when they tried to connect, in which case the Follow button automatically converts to the Connect button. Still, you’d think this would be a good time to at least say hello.)

One could argue that you should accept most or all empty invitations and then try to work out who’s good to keep around.

In this view, you as the recipient of the empty invitation could try to start a conversation with the inviter and then disconnect with those who don’t respond favourably.

My default position is to ignore (reject) the invitation if it hasn’t been accompanied by a note. 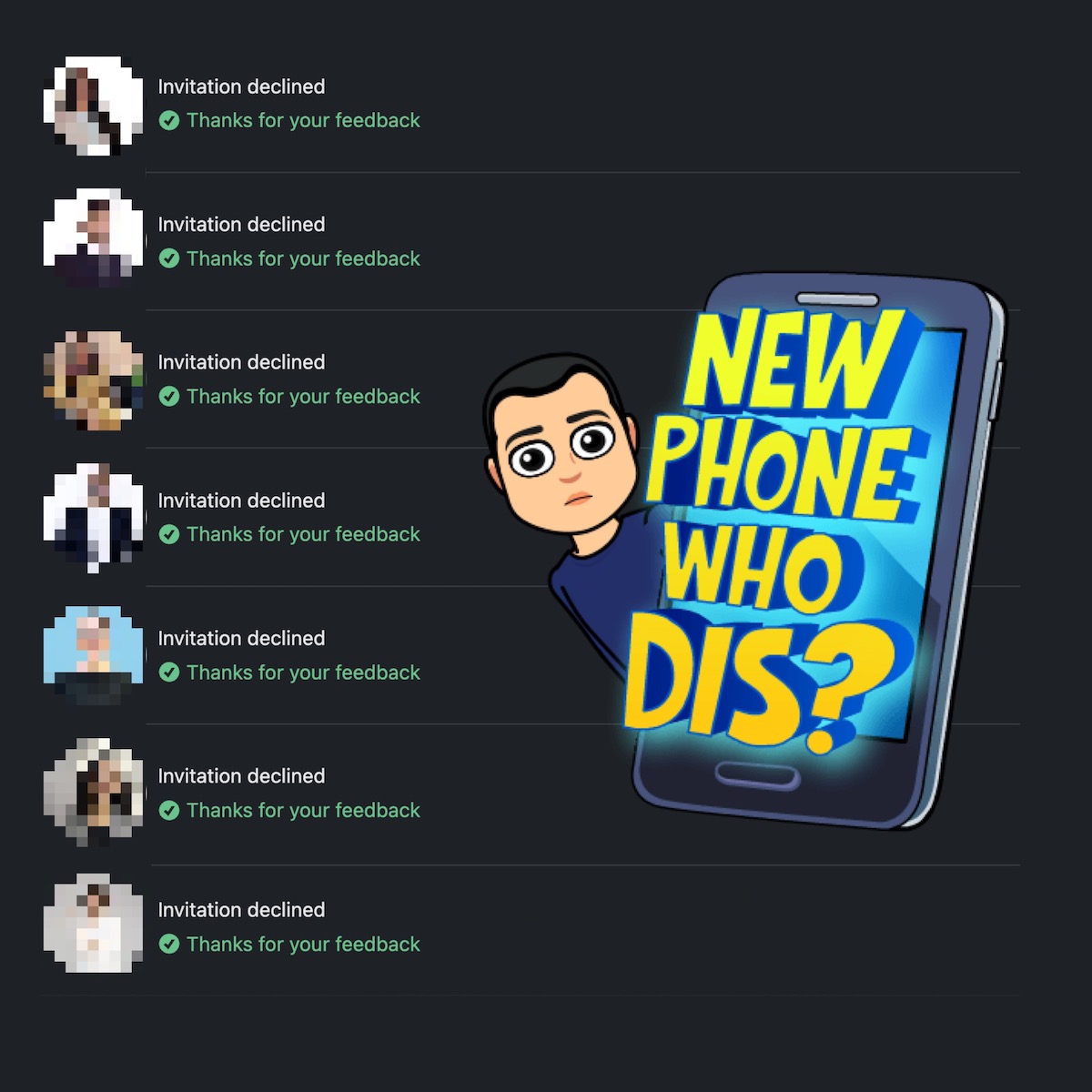 I sometimes accept invitations with no note if I think the inviter might be interesting based on their headline or some other very quick assessment of their profile or content.

There’s little harm done if they’re not a good fit, though it would be a burden for me to take that approach with everyone – so I don’t.

By the way, don’t assume that just because you’ve had a recent public interaction with someone that you can then follow up with an empty invitation. Not everyone attends to their outstanding invitations quickly, and it’s all too easy to forget such interactions.

Although I do check my outstanding invitations regularly, I also get involved in lots of conversations, and so I appreciate a note to help jog my memory if nothing else. 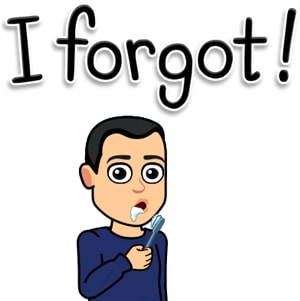 What about missing potentially good connections?

By ignoring invitations from people who don’t personalise their notes, I run the risk of missing out on perfectly good connections, some of whom might have turned into advocates or clients.

It’s the old problem of throwing out the baby with the bathwater.

Also, some of the people who don’t send me a note with their invitations aren’t staying silent on purpose.

They might have wanted to send a note but didn’t realise that the default behaviour of the LinkedIn mobile app is to send a connection request without prompting the sender to write a note (stupid, right?).

Some of those people realise the problem after the invitation has been sent and a proportion of them send me an InMail to act as the note they meant to have sent with the invitation.

Here’s an example from Nartan Rose, shared with her permission. 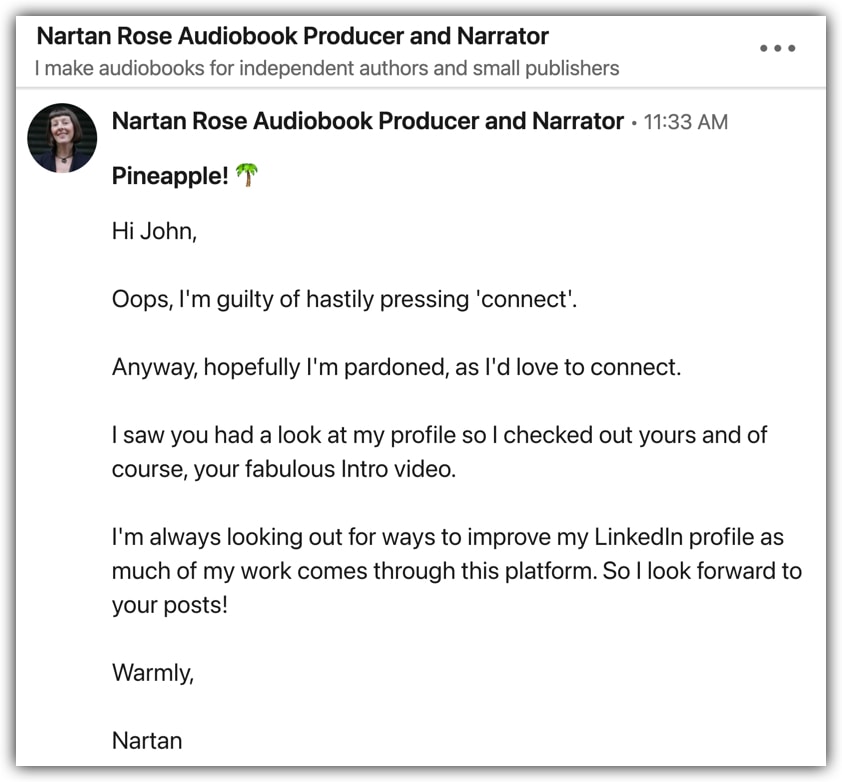 If we set aside the mistakenly blank invitations, we’re left with two groups:

Telling the difference between these groups is hard. 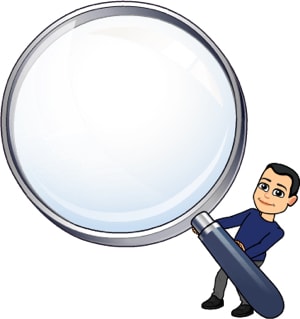 That feeling leads me to conclude that if someone has not sent me an invitation note, I’m within my rights to ignore their invitation.

Furthermore, if I’ve never heard of them before, which is almost always the case, I will click the I don’t know [NAME] link.

These are like strikes against someone’s name. If someone receives too many of them, LinkedIn will temporarily restrict the number of people they can connect with.

I’m not certain of how this works or what the limits are, but one of the possible restrictions is to be able to connect with others only if you know their email address. 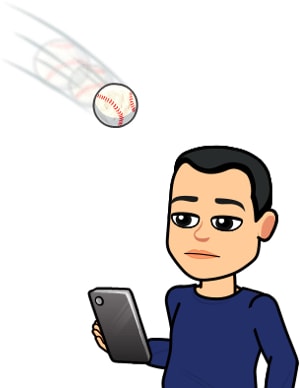 Now, some people might think it’s unfair for me to indicate that I don’t know the person trying to invite me, as that puts them at risk of punishment from LinkedIn.

But the truth is … I really don’t know them! And as they’ve made no attempt to engage with me, I’ve ended up wasting a little bit of my day dealing with an invitation I didn’t ask for.

They’re within their rights to send blank invitations if they want – and I’m within my rights to deal with those invitations as I see fit.

If I reject someone who didn’t personalise their invitation, I’m open to changing my mind and connecting with them if I later receive a recommendation from someone or if we have a fruitful public exchange in comments.

By the way, people with no restrictions on their account can currently invite up to 100 people per week to connect.

I think that’s more than enough for anyone. If you’re doing networking the proper way, you’re surely investing time to get to know the people you’re connecting with.

I just don’t think that’s possible if you’re trying to usher 100 people through the door each week.

Do you reply before accepting an invitation?

I sometimes reply before accepting an invitation, to ask why the person is trying to connect.

I did a video about how I used to handle this, and you can see the process below.

I tend not to send a long reply these days, and very often these messages don’t receive a response, which suggests that I would have been right to ignore the invitations altogether to begin with. (You can sense that I’ve lost some of my optimism for this endeavour.)

My invitations to others.

I invite people only if I can send them a highly personalised invitation or if we’ve had a public exchange.

Even then, I’ll still add a personal note. This is good for context in the future, if I want to look back at how and why a relationship began on LinkedIn.

I don’t invite many people to connect. When I do, it’s almost always because someone else has recommended them to me or, more likely, because I’ve seen and interacted with them on a post.

In both cases, I have some context to refer to in the 300 characters I’m allowed to write my invitation.

I read people’s profiles before attempting to connect, looking for anything that I’d call a conversation hook – an opportunity to start a non-salesy conversation.

There’s an art to writing a good invitation note, and I captured several examples in my November 2020 connection experiment. See the section titled Examples of good invitations in that article.

One of my best conversation hooks is in my LinkedIn headline, where I tell people to look for my secret word.

This not-very-secret word is hiding in the About statement of my LinkedIn profile, and anyone who uses it in their invitation has proved to me that they’ve done at least a basic check of my profile. 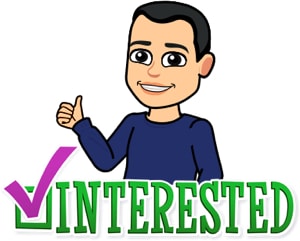 It doesn’t feel as though this is asking for much and yet the November 2020 experiment showed that only 5% of all invitations contained the secret word.

Things have improved since then and I now estimate that it’s more like 15%–20% of invitations. Still not great!

The secret word method isn’t my only conversation hook. You can look through my profile and see what others you might be able to find. Here are a couple to get you thinking.

I had a temporary background banner showing people where to look to personalise their invitations on mobile. This isn’t a conversation hook as such, but it’s a reminder of best practice.

This screenshot also highlights part of my headline that prompts people to look for my secret word. 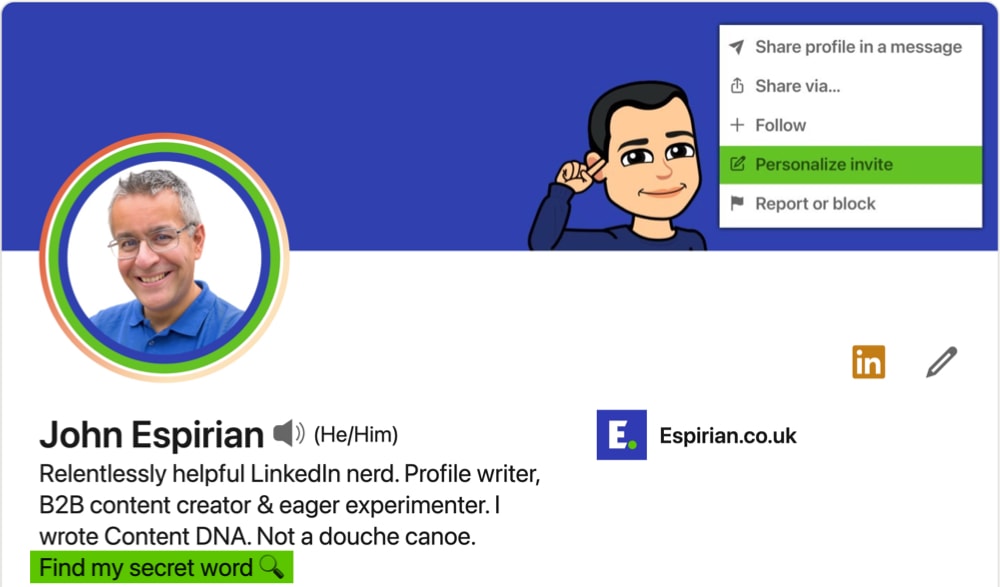 For a bit of fun, I also had a temporary away message (a Premium-only feature) set up in my LinkedIn direct messages that mentioned my secret word approach: 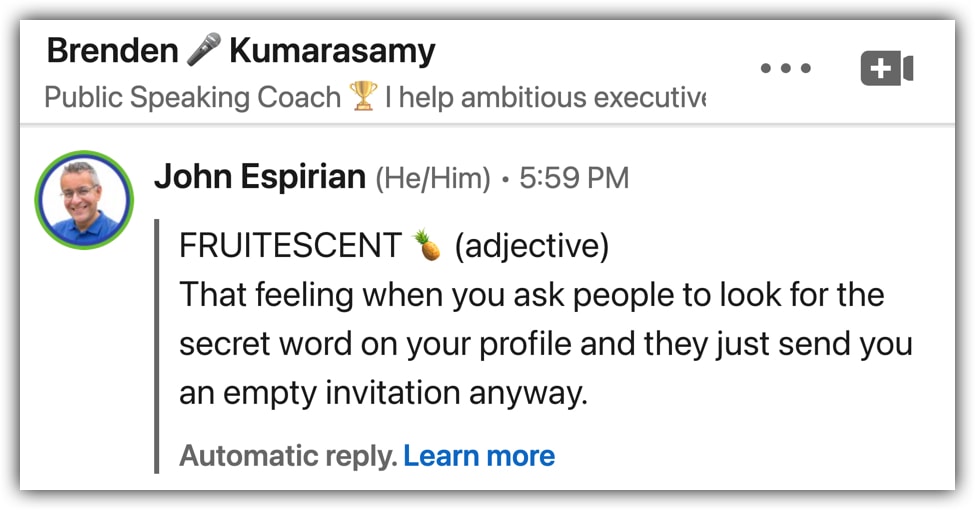 Most people don’t personalise their LinkedIn invitations and I’ve decided to ignore the majority of blank ones I receive.

If you don’t want to be ignored, please personalise your LinkedIn invitations. You might be surprised at how much it helps you stand out in a sea of generic inviters.

Connection strategy is bigger than what I’ve set out here. I talk about it more in my LinkedIn course, so check that out if you want all my best thinking on this and other LinkedIn topics.