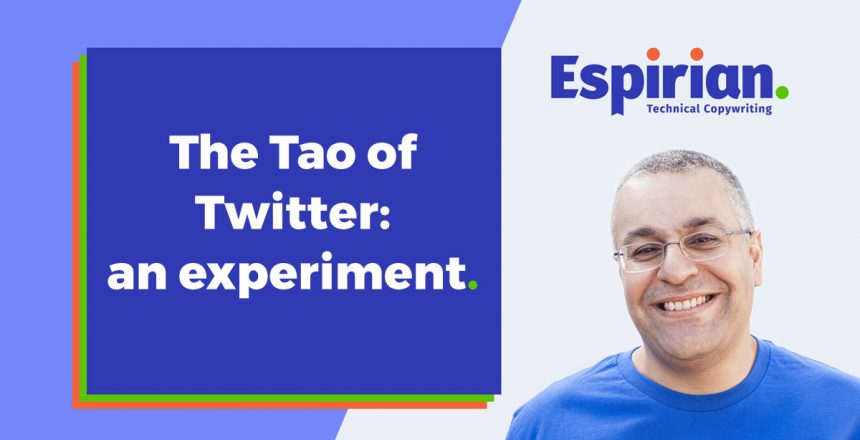 I’ve worked as an independent technical writer since the end of 2009. I’m fortunate to have a career I enjoy: I get to take part in varied, interesting projects, and the words I write help people get stuff done. That’s all awesome. Lately, I’ve been thinking a lot about how to raise my profile. How does one do that?

If you’re not bothered about the background – how very dare you! – then jump straight to the experiment.

The best part of my work is the feeling I get when I know I’ve helped someone. I’m greedy to hold on to that feeling. And I want to multiply it. That’s one of the reasons I write this blog. I’ve got stuff in my head and it needs to come out. I’ve received lots of nice comments – mostly from people in the editorial community – saying that they’ve found the content useful. How cool is that?

Now my challenge is to get the message out to more people. So, I’ve finally started a proper mailing list (check out Espresso), and I’m becoming much, much more active on social media.

My favourite social platform by far is Twitter. I never thought I’d be enchanted by a 140-character limit – I’m a writer, remember – but I love it. It’s the perfect place to share short, sweet nuggets of wisdom. It’s also a great way to exercise my editorial brain: how do I fit this message into just 140 characters? You soon learn what’s fluff and what’s essential. That’s a gift!

Anyway, for a long time I was what you’d call a very occasional Twitter user. I used to pull up the app once a month, have a nose around, not tweet anything and then go off and do something else. That’s probably not a million miles away from the behaviour of a lot of users, even these days. And guess what: this approach did precisely zero to help me. I would end up wasting a small part of my life on what was nothing more than a curio.

By the time I was ready to attend my fourth SfEP conference in 2014, I knew I had a small audience in the form of the editorial professionals I was regularly in touch with. I decided around then that some website rebranding was in order, and so was an increase in my reach on social platforms. So, seemingly years after everyone else had woken up and realised they needed to use social media as part of their marketing strategy, I finally did the same.

Here’s the bad news: it’s been slow going. I’ve seen lots of other people grow audiences really quickly, and that’s always made me wonder why my path has been more of a slow burn.

But here’s the good news: it doesn’t matter. Each step forward is a step towards a better place. Growing slowly is OK. You’re not a bad person if your profile grows slowly. It’s really OK to be that person.

In late summer 2016, I was fortunate to get the chance to talk with Mark Schaefer, a big name in content marketing and the writer of several interesting marketing books. At the time of writing, I’m just finishing off reading The Content Code (well worth a look).

Mark and I talked about the steps freelancers and businesses could take to raise their profile. He told me quite earnestly that I needed to think about a plan for growth. ‘You need to be known,’ he said. And he was right.

On Mark’s recommendation, I picked up one of his books – The Tao of Twitter – and flicked through to chapter 5, which contains 25 tips for growing your Twitter audience. I felt a challenge coming on and so did he.

‘Follow these tips and see what happens over the course of one month,’ he suggested.

He has that gentle sense of persuasion that all good marketers seem to be blessed with.

Now, at this point you might expect me to be building up to a massive reveal.

That I suddenly collected thousands of followers.

That people were beating down my door.

That all my dreams came true. 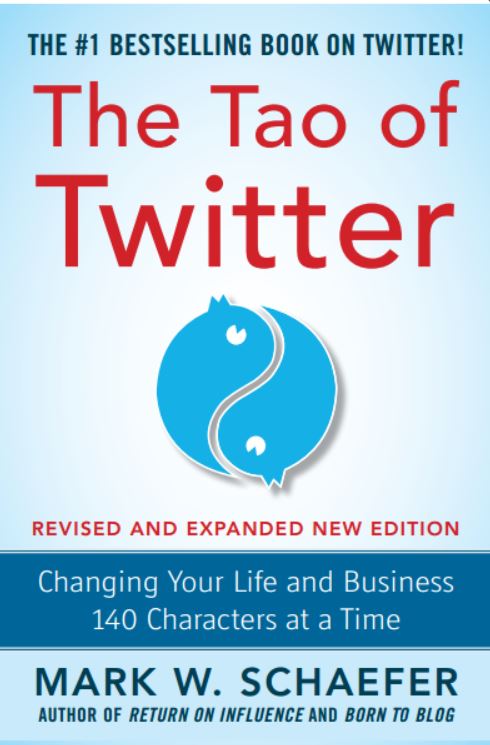 Well, not quite. But I did have some success, and this is what this post is about: sharing the things I learned during my one-month experiment with The Tao of Twitter. Here’s what happened.

That’s 111 new people in my network in a month. Not amazing in absolute terms, but that’s still a relative growth of 14%. I think that’s pretty good going.

OK, here’s some of what I discovered. I’m not going to go into day-by-day detail, as this post is already long enough as it is. But if you have any questions, please let me know by leaving a comment below.

The first big thing for me was to look at other people’s Twitter lists. I hadn’t really investigated lists before, but I took Mark’s advice and indeed I discovered new people. Specifically, I found other copywriters and technical writers, and lots of interesting posts.

I decided to create my own list to keep track of some of my favourite people. Want to take a look?

The recommendations in The Tao of Twitter made me realise that there are loads of online resources available to help me with social media and with content marketing in general. One of my favourite finds was answerthepublic.com, which helps people understand the questions their audience is likely to be asking of their industry. Sounds boring? Wait until you see the way they map the results. It’s a readymade list of blog post ideas, all generated within a few seconds. And it’s free. Come on! 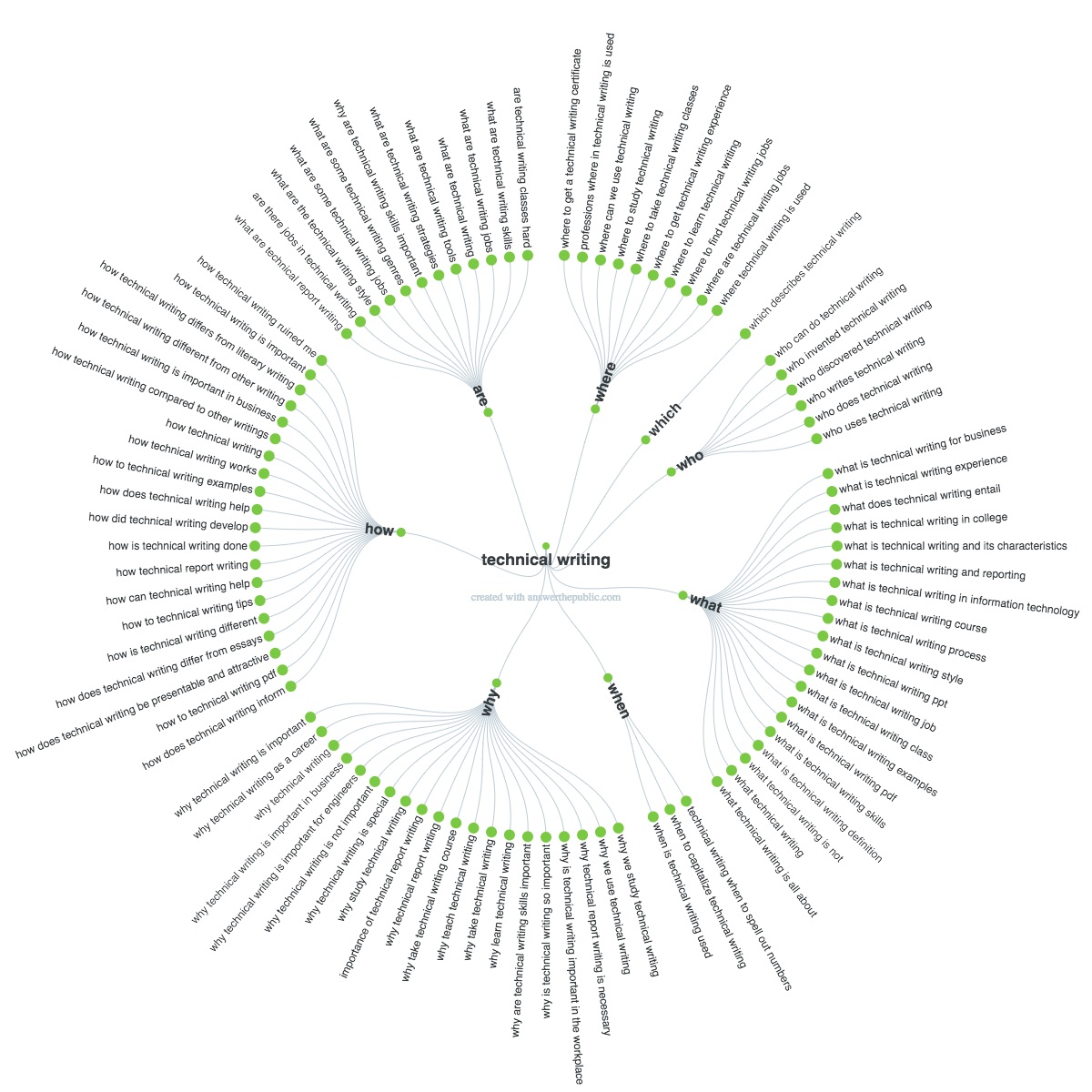 Status updates and blog shares are great. Get a retweet from the right person and your content can suddenly be put in front of a large new audience. Cool.

If you can build a core group of colleagues on social media, they could end up being your brand advocates for years to come. That might sound a tad cynical but it’s really not meant that way. You just can’t fake sincerity for very long. But if you invest in others by listening to them and being interested in what they say, you’ll develop the sort of connections that no viral tweet will ever give you.

Video has been massive for me during this experiment. I always thought a nice, chatty tweet to introduce myself to new connections was a good approach. Then I found that people – particularly the marketing-savvy bunch in the Content Marketing Academy (CMA) – were using short video clips to say hi to each other. Brilliant. What’s going to be more memorable? Saying hello with a few written words or recording a personalised welcome on video? No contest.

I tend not to be the nervous sort, so I gave Twitter video a go as soon as I learned about it. No doubt I’ll look back and cringe at my first few efforts (e.g. here), but after recording a dozen or so videos it became second nature. Definitely worth a go if you’re not too camera shy. Here’s my latest example, recorded for this very post:

Here’s an example of a Twitter video to accompany my latest post:https://t.co/JVE3gb5LiI pic.twitter.com/si5RBVETkI

Since making my first forays into personal video, I’ve participated in a proper video interview and have signed up for the CMA’s Facebook Live challenge, which involves recording a video each day throughout October 2016. Add me as a Facebook friend if you want to see how this goes.

In preparation for October’s challenge, I tested Facebook Live during the recent SfEP conference in Birmingham. It was all good fun and not half as scary as you might think.

The most important thing I learned

What came across most vividly from Mark’s advice was that we have to embrace the social aspect of social media. He sums this up with just three words: be more human.

To some that might sound like a glib, throwaway line. It’s really not. Businesses are made up of people. People do business with other people. We should all be professional, yes, but there’s a huge opportunity to make a dent simply by being ourselves and revealing our personalities. This is really a fundamental learning point for me.

I’ve always been that open, honest and helpful guy. I’d just never really thought about it before. But now I want to be that person even more. I want to bring out that side of me even more. So that means just loosening up. Being even more approachable. Being more me. I think and hope my adventures in video are going to help with this a lot.

This whole experiment has confirmed to me how much I enjoy engaging with others and how rewarding it is simply to be helpful. One of my goals from now on is to be the most helpful person in your Twitter feed. No doubt that sounds ambitious. I’ve got a lot of competition, after all. But I love a challenge. So try me out. Ask me a question. I guarantee you’ll get a thoughtful reply.

There are a whole stack of questions I could ask off the back of this post. How are you growing your social media following? Are you interacting with your followers? If so, has it enriched your experience? Do you have a plan for the coming year? And lots more. Let me know by leaving a comment below or by catching up with me on Twitter. As ever, I’d love to hear from you.