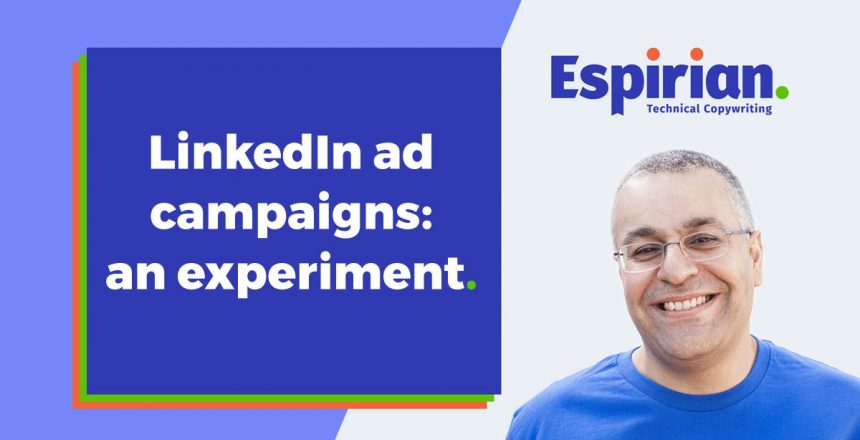 Have you ever advertised on LinkedIn? I hadn’t until recently. But I’m an avid user of LinkedIn and thought it was worth a try.

This post includes my personal data and thoughts on the process of advertising on LinkedIn.

Compare this with ~3500 visits per month from people finding my site via social media and Google.

I don’t think LinkedIn ads are for me.

I’ve long heard that LinkedIn offered an expensive advertising platform that wasn’t as sophisticated as Facebook’s. I like to test things for myself, so I came up with my own ad campaign. I’m all for transparency, so I posted about my experiment on LinkedIn.

I knew that LinkedIn is my best social network for engaging in business conversations and finding new B2B writing clients. So perhaps the ads would work well? I really wasn’t sure. Here are the results of my week-long campaign, along with some thoughts about the process.

Confession: I did this experiment mostly because I had $300 of free LinkedIn ad credit to spend and not much time to spend it in. Just mentioning that in case you think I have money to burn – I don’t!

How I set up my LinkedIn ads.

I used the Create ad button on the Advertise on LinkedIn page.

The ad-creation process was only a few screens long. I’m not covering it in detail here.

I created two ‘text ads’ (though they allowed for image uploads, which seemed odd) that looked like this:

Who I targeted with my LinkedIn ads.

My ads targeted marketing managers and technical officers in Newport (home), Cardiff (nearest big city) and London (where all the money is).

Given that the ads clocked up almost 700,000 impressions, this presumably means that many people saw the ads multiple times.

An ‘impression’ means the ad was loaded but doesn’t guarantee that anyone actually saw it. If you’re anything like me, your eyes naturally skip past adverts.

Still, at least I know the links in my ads were clicked 68 times, so someone took notice.

I did receive a few contacts from potential customers in the week the ads ran, but I can’t tell whether any of them were as a result of my site being discovered via a LinkedIn ad.

Here’s how my ad spend broke down:

Impressions are the number of times the ad was displayed onscreen.

This doesn’t mean that people saw or read the ad – only that it was shown to them.

If you’re anything like me, your eyes will naturally glide past ads. This is called “banner blindness”. It’s quite common in most savvy web users.

I wrote two text ads, which the LinkedIn platform told me would be automatically presented to viewers when the campaign went live. I assumed that the display would be split 50/50, but that wasn’t the case.

I’d have preferred the split to be the other way around – at least more people would have seen my logo that way.

I set my maximum budget to $50 per day, but a couple of times that budget was exceeded by small amounts. This wasn’t a problem, but I assumed that $50 would be a hard ceiling, especially after seeing a spend of $49.99 on 31 October.

Things I did wrong during my LinkedIn ad campaign.

I pointed both text ads to my espirian.co.uk homepage URL. I should have pointed at least one of the ads to my writing page or a dedicated landing page. Here’s a relevant tweet about that:

Great write up, John. I do think that it might have been good to have had the ads linking to separate landing pages, using tracking URLs, and maybe had some contact forms on those pages – at least then you would have known if the new contacts came from your ads.

I also could have taken more time to write better text in the ads. In my defence, the character limits are very tight – there’s barely space for one sentence. (I’m sure I would have been more thoughtful about this if I hadn’t been using free LinkedIn ad credit.)

Things I didn’t like about the LinkedIn ad experience.

Budget setting: There wasn’t an option to set a total budget for the campaign. Instead, I had to define when the campaign would end. As a result, my intention to spend $300 ended up with an actual spend of $340.22.

Thankfully, I was keeping track of proceedings. But if I’d left the campaign open-ended and forgot about it, the bill might have been rather higher.

Character count: There are very few characters in which to write a headline and the text of the ad. It’s hard to include any personality in such a small space. (LinkedIn does offer different sorts of ads with more space, but I didn’t experiment with them.)

User interface: The LinkedIn ad platform is buried away and doesn’t seem accessible at all via the LinkedIn mobile app. Thankfully, I do have a trick for viewing the desktop version of LinkedIn on my iPhone and iPad.

Things I learned when running my LinkedIn ads.

Weekdays work: The busiest days are Monday and Tuesday. There was almost no activity on the weekend.

Impact: The campaign seemed to have no effect on the number of enquiries I received via my website. Hardly surprising given that there were only 68 clicks.

A look at my Google Analytics doesn’t show any marked increase in traffic during the ad campaign:

Compare this with a longer sample of data dating back to the start of September 2017 and you’ll see there’s no obvious difference:

The good news about LinkedIn ads (for me – and perhaps for you too).

The LinkedIn ad campaign didn’t really work for me.

I can breathe a sigh of relief, though: my organic reach on LinkedIn and on Google in general means that I don’t have to nervously feed money into an ad platform in the hope that someone will decide to hire me to write content.

Content marketing suits me well because I don’t have to be remotely salesy – I can crack on with sharing helpful information and building long-term relationships with people, which ultimately leads to business and referrals.

The good news for you is that you can adopt the same approach of creating helpful content for your business rather than ploughing lots of money into advertising.

It does mean you need to be patient – see The 30-month mindset for more about that – but I think the long-term payoff is worth it.

Spending more than $340 on LinkedIn ads generated only 68 clicks through to my website.

If I’d spent more time crafting the ads and targeting people better, that might have produced a better result. Still, I wouldn’t want to try again and am quite happy with my non-ad-based marketing approach.