The royal order of adjectives. 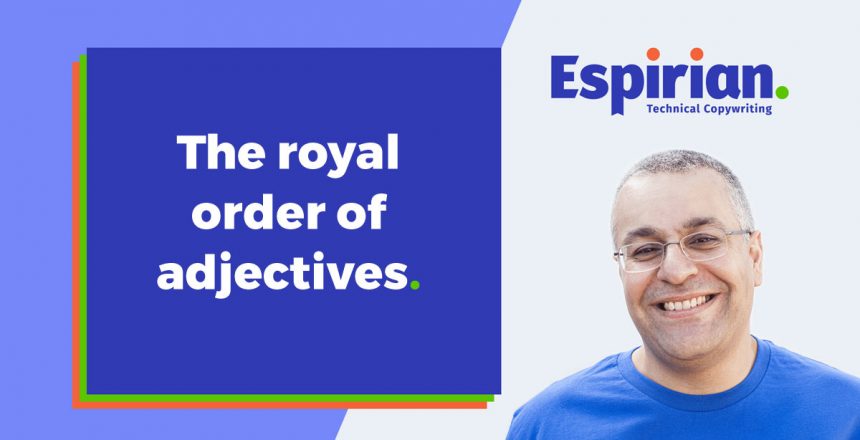 It’s funny how native speakers of English have that sense of what sounds right and what doesn’t. Even though we can’t always explain why, we often know when there’s something wrong with the way a piece of text is written.

Our ability to detect bad ordering of words is more acute when we read text out loud (see tip 5 of my top 10 proofreading tips).

Read these sentences out loud:

Why is that? After all, the car is small and blue. It’s also blue and small. These are just adjectives – describing words – that tell us the properties of the car.

So, why should one sound right and the other sound wrong?

It’s because there’s a secret order in which adjectives must appear.

I say ‘secret’ but it’s not really a secret. It’s just that most people who were at school any time in the 1970s and onwards were probably never taught this.

The secret order of adjectives

Let’s get the naming right. This not-really-secret secret is properly known as the royal order of adjectives.

Here is the royal order of adjectives in the order they should be used when describing something:

The classic version of the royal order puts size and shape together. I like that version so that’s what I’m using here.

The order given in the tweet image is slightly different. If you spotted the difference, you’re my kind of person!

I hope you can now see why my earlier example was correct as a small blue car. It’s because size has to come before colour.

Stick with the order above and you can create great long strings of adjectives to describe your nouns. Remember: just because you can, doesn’t mean you should.

Don’t worry if you’ve never heard of this order before. Most people haven’t, but native speakers instinctively know the right order to use. Here’s a comment from one of my editorial colleagues:

I taught this to my English as Additional Language (EAL) intervention group when I was a teacher. It’s weird how you do this naturally but don’t really know why – I don’t remember being taught this.

But hang on. There’s more.

It means that similar groups of words are ordered based on their vowels. For this rule, the vowel order is I, A, O.

These examples should help:

This rule supersedes the royal order of adjectives, which is why Big Bad Wolf is correct.

If it weren’t for ablaut reduplication, we’d write Bad Big Wolf. And that sounds terrible.

After all, who doesn’t love a good writing tip? I share short, sharp tips on LinkedIn, so click this hashtag and you’ll jump straight to my collection: