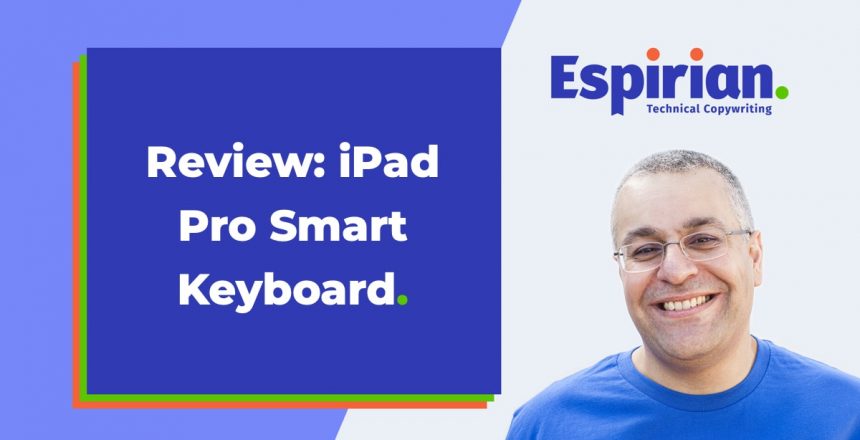 Having recently bought an iPad Pro, I couldn’t resist the temptation of pairing it up with the new Smart Keyboard. Apple took their time to make the unit available for delivery, but now it’s here I thought I’d share some notes about my early experiences with it. Was it worth the money? Read on and see what you think.

Attaching the Smart Keyboard to the iPad Pro

Let’s start with the positives: Apple’s new three-circle magnetic connector is simple to use. A pleasing snap confirms the connection has been made. And separating the units requires a bit more than a gentle pull, so it’s unlikely that you’ll disconnect by mistake – I like that.

As well as offering the standard typing position, the Smart Keyboard doubles up as a stand by folding away behind the iPad Pro. Either way, it’s a comfortable viewing experience.

Good news for everyone who wants to save a bit of time: keyboard shortcuts are available in common apps such as Mail, Pages, and Safari.

Hold down the command key for a few seconds to see a list of all available shortcuts in the current app. Here are some examples:

Well, this is all going very well, isn’t it? It’s never that easy. Here comes the pain.

There is no escape (and no function keys)

That’s right, there’s no esc key. This would have been useful for ignoring some of the automatic text replacement suggestions that appear while typing.

And it’s not just the esc key that’s missing: the entire top row of a standard keyboard is gone. I could happily live without most of the function keys on that row, but I do miss the options for controlling brightness and volume.

An even bigger miss is that the fn key usually found in the bottom-left corner of the keyboard has been replaced with a globe key that switches between keyboard input types. This button is useful if you regularly want to include emojis in your text, but it means you can’t delete characters to the right of the cursor. This is because there’s no way to apply the fn+delete keyboard shortcut that’s available on standard Mac keyboards.

It’s annoying that some of these basic features aren’t available on such an expensive bit of kit.

I had hoped the combined unit of iPad Pro and Smart Keyboard would function well together when placed on my lap. In practice, the result is a little wobbly.

Because the keyboard is lighter than the iPad Pro, the unit feels top-heavy and there’s some swaying from side to side when bashing away at the keys. In fact, that’s happening right now as I write this. I imagine the feeling is similar to writing while being on a ship at sea.

No cover for base

I was glad when I heard that the Smart Keyboard would also double up as a cover for the iPad Pro. In fact, it’s part of the reason I bought the keyboard (or at least that’s what I told myself). But the Smart Keyboard doesn’t cover the back of the iPad Pro, meaning that half the device is always exposed when it’s not in use. It’s not what I was expecting but I guess I’ll get used to it.

That’s probably the strangest subheading I’ve written for a while! I took some close-up photos of the keyboard and noticed that the camera sees things the human eye doesn’t. Take a look at what a woven nylon keyboard looks like in fine detail:

The result looks oddly dusty, yet the kit is in pristine condition – I took the above photos just a few hours after unpacking the Smart Keyboard.

At £139, the Smart Keyboard is the most expensive keyboard I’ve ever bought. Despite the misgivings above, I’d say the cost is just about worth it: you get to turn your iPad Pro into a mini-laptop, and the productivity difference is noticeable, especially when you’re in meetings.

On balance, I’d recommend the Smart Keyboard but wouldn’t say it was perfect.

It’s important to note that the Smart Keyboard isn’t the only game in town. You could use a wireless Apple keyboard instead, giving you the benefit of using the forward-delete feature. It isn’t ideal to carry a separate keyboard when you’re on the go, but it’s certainly much cheaper.

What do you think? Let me know by posting a comment. I’d love to hear from you.