How to name files. 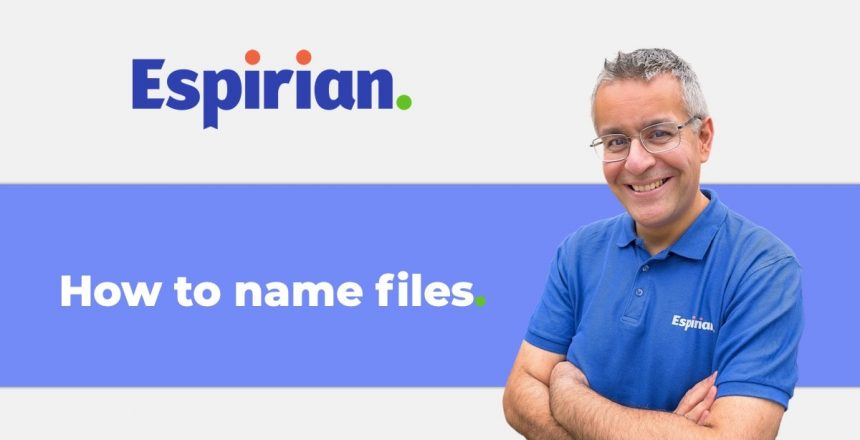 Trust me, you don’t want to be on either side of that conversation.

How files are named isn’t going to excite anyone (even me, and I’m a proper nerd), but it’s one of those things that can make life easier for you – if you do it right.

But get your labelling wrong and you’ll end up confusing your colleagues. In the worst case, they might ‘do a Barry’ and edit an outdated file. And that could cost you.

Here’s what you DON’T want:

✅ Use a logical structure

A file name should describe the content or purpose of the document.

If you were producing a finance document for SprocketCo, it would make sense to start the filename with sprocketco-finance. It’s short but informative enough to guide the reader, as it tells us the name of the client and the general type of document.

I like stating the client name (sprocketco) first. All other SprocketCo files treated the same way would line up in a nice alphabetical list – a logical approach.

If you have more than one client’s files in the same folder, ordering the content alphabetically will mean you group the documents by client.

If different client documents aren’t ever likely to be stored together like this, you might prefer to start with the ‘purpose’ component first and then place the client name second (or elsewhere). In a simple scenario like this, it doesn’t really matter too much. The important point is to be logical in your approach.

Here’s how an alternative arrangement would look:

Follow a logical, repeatable structure to create a name that describes the purpose of the file.

Separators are the symbols that go between the words in a file name. In the examples above, I’ve used a hyphen (-) for each separator.

Some separators cause problems for file-sharing services. For example, Dropbox doesn’t like the forward slash (/). Even if this weren’t the case, slashes in file names aren’t good, because they can be confused with longer file pathways.

Here’s an example of a file pathway on Windows:

But if the hyphen separator had been replaced by a backslash, that would make the file pathway look different:

Yes, that’s true. Here’s what happens when you try:

But, but, BUT! You can put a backslash into a file name on a Mac.

And that means a Mac user could send a badly named file to a Windows user.

Rather than risk this hassle, stick to using a separator you know will work well. Use a hyphen (-).

It’s also good practice (and beneficial for SEO) to use hyphens as separators for files that will be available on the web. So even if you’re consistent with the use of a different separator that doesn’t fall into the above trap, such as the underscore (_), it’s still better to use a hyphen.

Hyphens are good for URLs because they mean that keywords are treated individually rather than being lumped together as one phrase.

Here’s an example of what Martin means:

Use hyphens (-) as separators.

I won’t explain how numbers work. Suffice to say that the higher the version number, the more recent the document. Version numbers should go at or very near the end of the file name.

There should be no doubt which is the newest document here:

The problems come about when people dump the version numbers, instead using words such as ‘FINAL’ to act as status indicators.

This practice would be fine if you could be sure that the file really was the final version, but, as our introductory scenario above shows, that’s a dangerous game to play.

Even with the rest of the structure making sense, this numbering arrangement doesn’t work well. It puts an unnecessary cognitive load on the reader. In case you haven’t worked it out, the second item in the list above is the latest version of the document.

Although I like placing the version number at the end of the file name, sometimes it helps to include the author’s initials there, especially when revisions are going back and forward between people.

Let’s say I’m sending files to my colleague Tony Markwick, who’s editing them and bouncing them back to me. We might end up labelling our files like this:

The order is still clear and we can tell who’s edited each version. The hyphen between the version number and the initials adds little, and we won’t have a fight if it’s omitted (so long as we’re consistent).

If you’ve taken even the briefest moment to consider that this beautiful arrangement might be spoiled in the event that one of the parties uses three letters for their initials rather than the standard two, please know that you have my eternal respect and admiration.

Use numbers to include document version numbers. Don’t use words such as ‘FINAL’ as status markers – you’re asking for trouble if you do.

It’s OK to include capital letters in file names if you’re consistent about it, but I think it’s best to keep everything in lower case.

If your document is uploaded to a web server, capitalisation could pose a problem.

Some web servers are case sensitive, meaning that you could end up with two separate files that have the same name but different capitalisation rules. You should avoid this possibility by making everything lower case, for example:

Use lower case for all file names.

Include dates in yyyy-mm-dd format

The examples above include only a year in the file name. But what if you want to include a full date?

As usual, consistency is the key to success. I like being able to alphabetise on date, so when including a full date in a file name I think it’s best to write the date in this order: yyyy-mm-dd. For example:

See how the order would mess up if you were to write this in dd-mm-yyyy form:

There’s added confusion if people use the American date system of mm-dd-yyyy. That’s another reason why I think yyyy-mm-dd is best.

This name-filing system hails from my days as a desktop publisher in the 90s. As most of my documents were worked on by multiple people it was imperative that you never heard the someone shout out ‘s%$t, I’ve been working on the wrong version.’

By putting the time date in backwards order, along with the time, it ensured that the files sat in the folder in sequential order.

It meant a time check of the file you were working on would avoid hours of wasted time and confusion.

Wow, that was a long post! Here’s a quick recap:

The overriding rule is to be consistent.

What are your file name conventions? Let me know by leaving a comment below.

I've been an independent B2B content writer for 10+ years.

I write relentlessly helpful content for B2B businesses and personal brands so that they get better results from their website and LinkedIn profile.

Listen to 6 chapters of Content DNA (free, no signup).

1534 good-looking people aboard. Are you next?

Join my Espresso+ community from 31 Jan