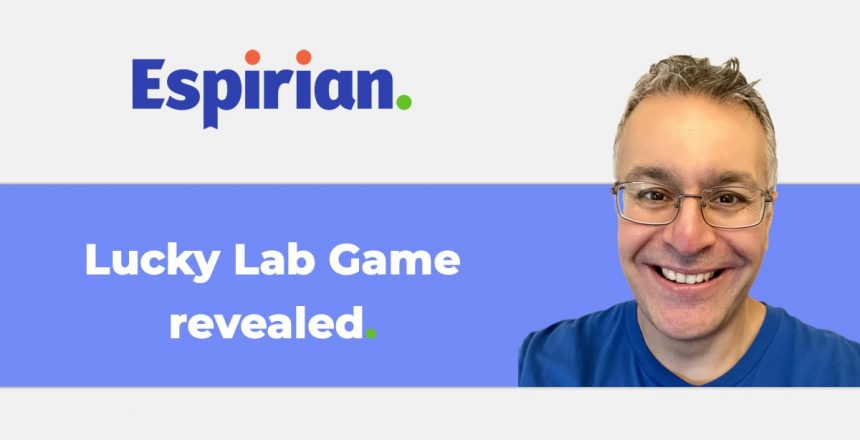 Lucky Lab Game was my secret viral marketing experiment that ran from February to March 2021.

As part of my move to making all of my content experimental, I thought it would be interesting to try a little test with a secret game that wouldn’t be revealed to players until they agreed to take part – leaving everyone on the outside none the wiser about what was going on.

Reply or DM if you're interested. I will need 5 mins of your time on Zoom soon(ish).

I set up a Calendly page to invite people to book a Zoom call to play the game. I gave prospective players the link only when they asked to play (the booking page was never publicised).

Each call was scheduled for 10 minutes on Zoom, and prospective players were told that they wouldn’t need to turn on their webcam. 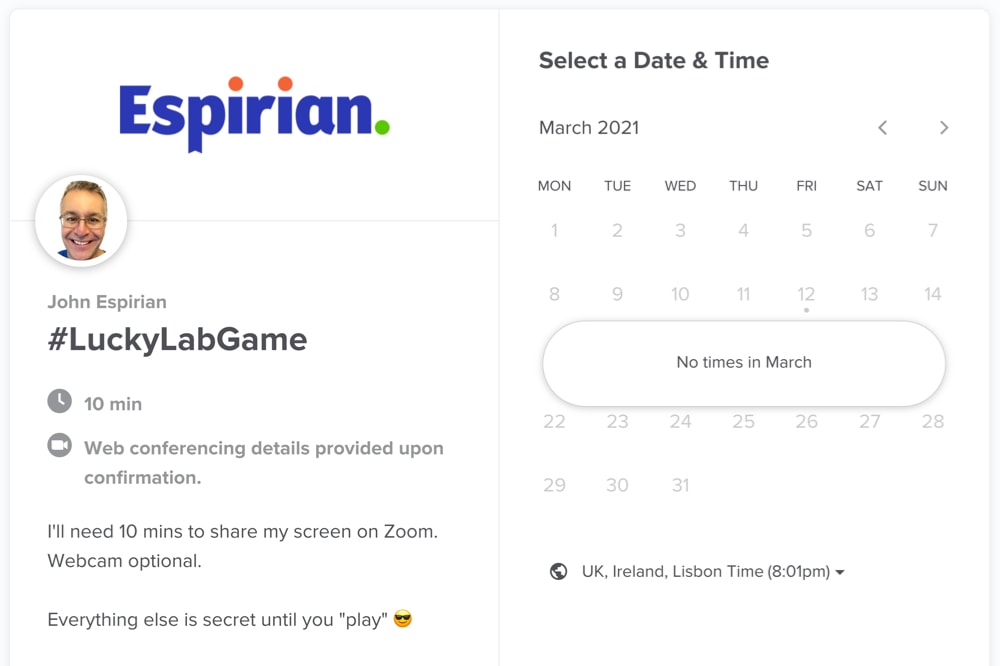 We used Zoom because I needed an easy, interactive way to share my screen so that I could show them what the game was.

Lucky Lab Game was a simple game of spin the wheel, powered by wheelofnames.com (a free service that’s great for picking competition winners), where most players would win a prize.

To show the wheel more clearly: 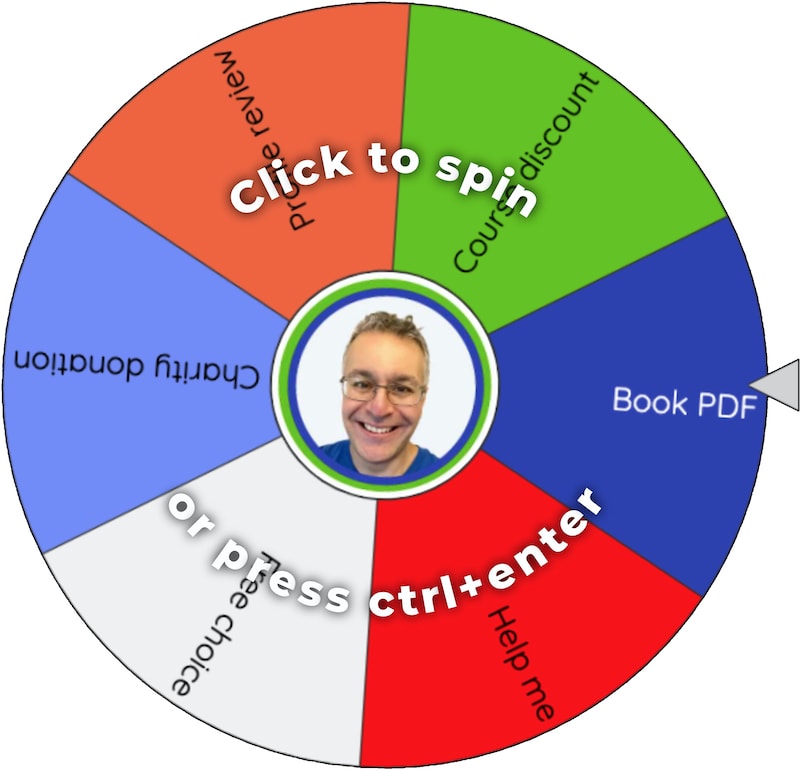 Any player landing on Help me wouldn’t win a prize.

Instead, I asked those people to do something from my How you can help me blog post. 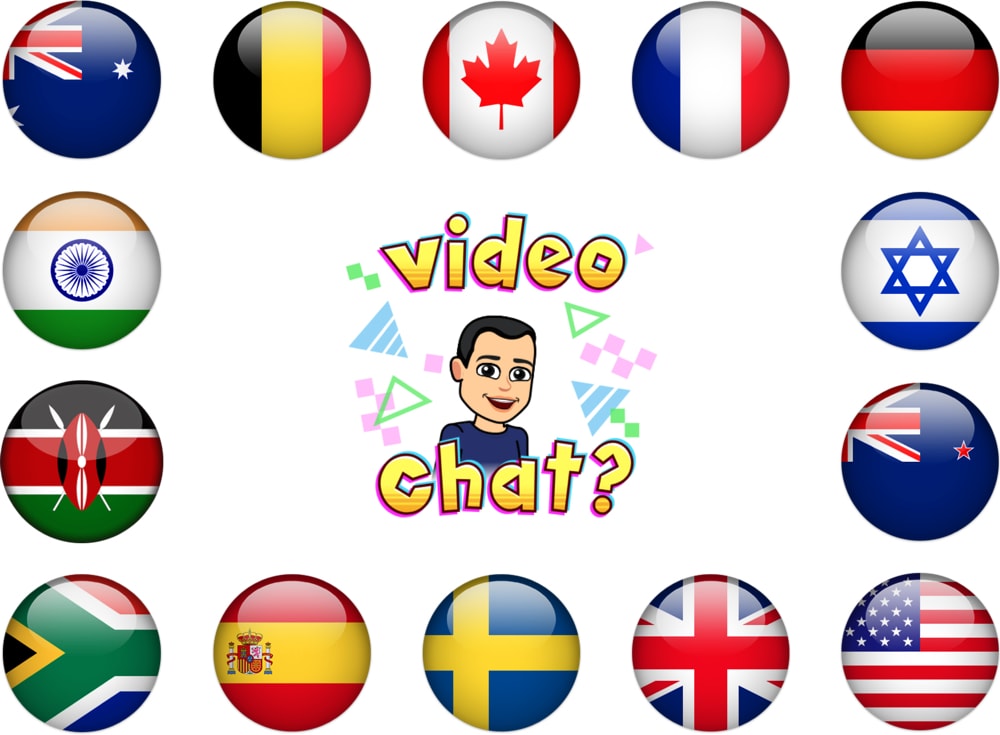 I've now had 6 no-shows on Zoom for my #LuckyLabGame – ouch! pic.twitter.com/inTsV7yfmw

Here’s how many people landed on each segment:

(That’s only 76 results. One person landed on Free choice but never decided which prize he wanted!)

Of this, £55 went to the Samaritans – the charity I’m supporting at the moment.

To honour players’ requests, other donations went to:

I've done 65 #LuckyLabGame calls in the past month. It's been an interesting experience so far.

No one has pressed the button yet.

At the end of each game, I asked players to put out a cryptic social media image post to say that they’d played the game.

I provided an image of me in my lab coat and goggles for players to share along with this text:

To cater for players’ preferences to post on different platforms, I created two images: 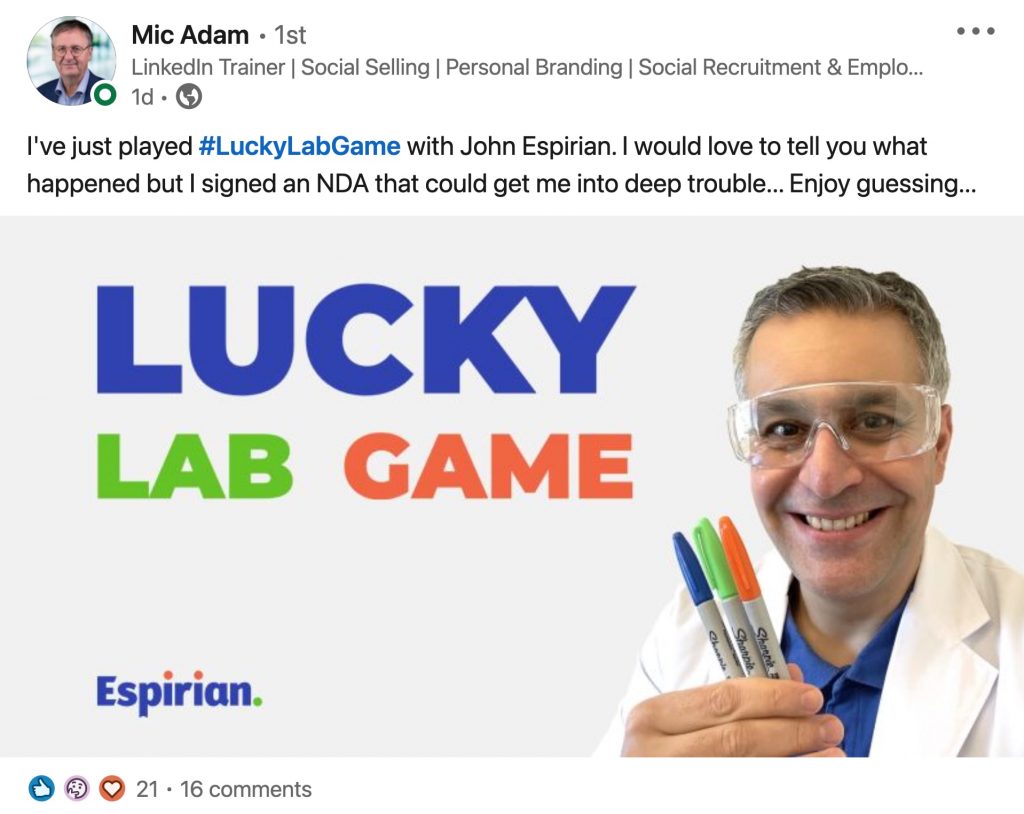 Some players embellished their posts a little, as above, but most stuck to the basic message. There were no surprises in where most of the social posts appeared:

Only Player 62 (Sonal Bahl) chose to post in a Story, and that was on LinkedIn: 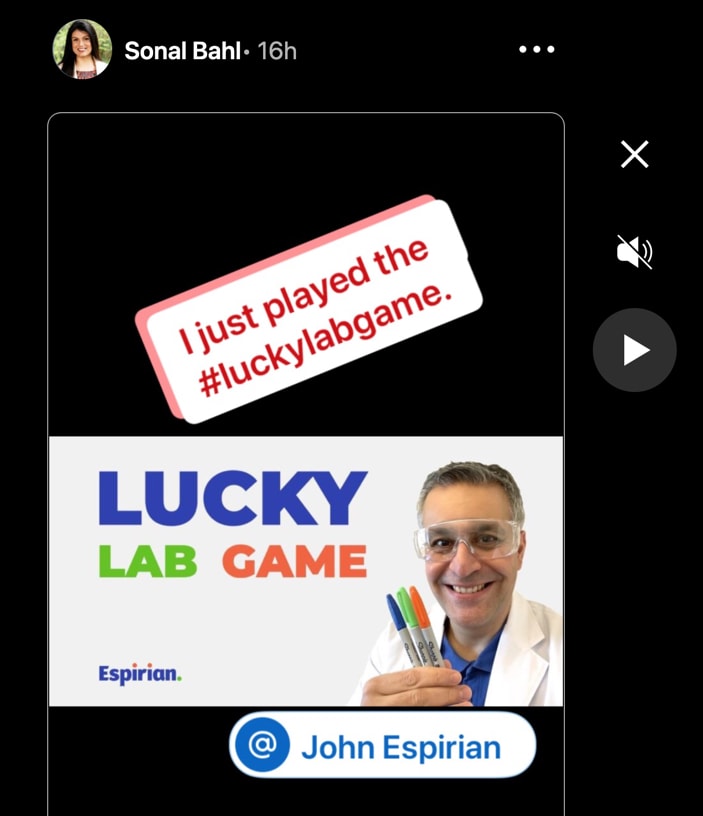 My instruction to the players was to look out for the comments in response to their cryptic posts.

I was expecting non-players’ natural curiosity to prompt questions about what the game was.

I told players that they were permitted to tell a lie in response to such questions, and that doing so would cause me to lie in my own responses (just for a bit of fun!).

I also said that players could choose the safe route when asked what the game was, telling commenters that they weren’t allowed to say and that anyone interested should contact me to find out more.

This led to me discovering a number of future players of the game, whose interest had been piqued by seeing one or more of these posts doing the rounds on social media.

The final option I gave players was, to me, the most interesting. I told them that they were allowed to tell the truth, namely:

“I played a game of spin the wheel and I won a prize.”

Doesn’t sound anything out of the ordinary, right?

Except I instructed each player that if they told the truth, that would terminate the experiment.

They were also told that only when the experiment terminated would I write a blog to explain everything (that’s what you’re reading right now).

Players were reluctant to tell the truth, as they could see that the game was fun and many liked that I was giving away prizes, especially the charity donations.

Finally, on 10 March, Player 74 (Anna Rump) – was brave enough to press the button and terminate the game.

Anna’s reply to this LinkedIn comment did the trick:

I didn’t shut everything down at that point, because I’d already booked in another 3 calls and didn’t want to cancel them.

I closed off my Calendly page to stop new bookings and played the remaining games, telling the last few players that the experiment was about to end and explaining why.

It seemed fitting that the last person would be Player 77 (Christine Lagendyk). I’m a numbers nerd and that number is both the year of my birth (1977) and also the angle (77º) I instructed my designer to use when crafting parts of my logo.

I did think I might be able to get to 100 games but I’m happy with where I reached.

During the experiment, players kindly bought me a total of 7 rounds of coffee (that’s £35) via Buy me a coffee.

Player 10 (Ariel Lee) kindly passed up the opportunity to take a LinkedIn profile review and gifted it to a friend.

She also told the best lie during the game: that she’d won a Lamborghini.

I might need to do a few more LinkedIn profile reviews to be able to afford those sort of prizes for my competitions!

Player 37 won a copy of Content DNA and told me he would be copying the game idea for his business.

Player 44 (Brenda Meller) won a LinkedIn course discount and invited me to do a LinkedIn Live session with her.

Player 45 (Matt Picheny) won a 5-minute version of my LinkedIn profile review and responded by booking a 60-minute consultation to discuss personal branding for his business.

He’s since booked another consultation. That’s £400 of quite unexpected business from a really cool guy.

Player 52 (Eve Gaut) caught me at a bad time and I was 4 minutes late to our Zoom call. Given that the call was meant to last only 10 minutes, that was really quite terrible of me (and totally out of character – I do punctual really well).

While I was there apologising, Eve told me that she thought the experiment had been something to do with deliberately standing people up to see how long they’d stay in the Zoom waiting room before bailing! Funny how the mind concocts such stories.

That actually would have been an interesting experiment in its own right, but I couldn’t bring myself to let people down like that.

After almost being stood up by me, Eve ended up landing on the Help me segment!

I’m interested in psychology and I thought it would be fun to see what would happen in setting up an experiment with a small group of insiders and a large group of outsiders.

As a copywriter, I know my trade comes down to armchair psychology: understanding the intended reader so well that you can craft the right message to influence them. 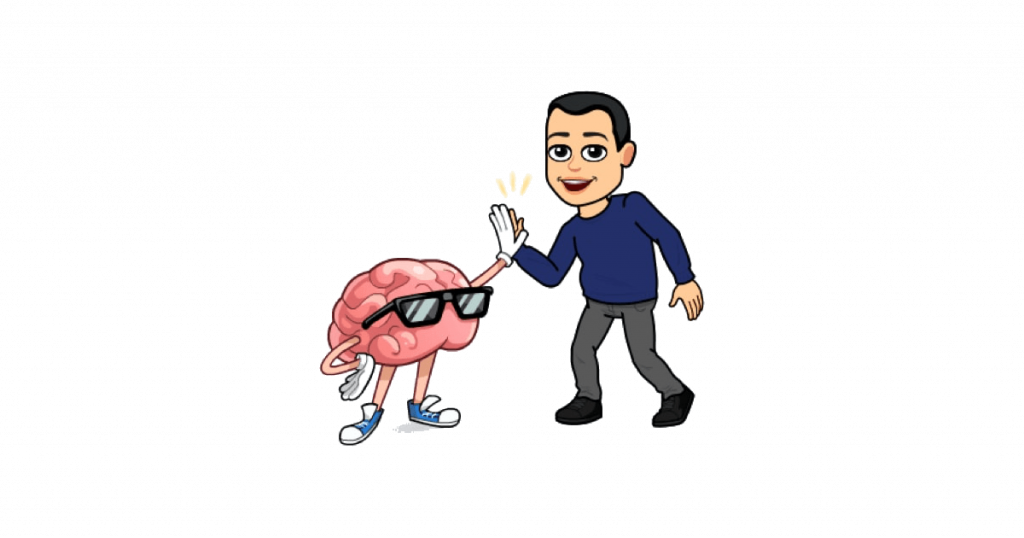 So, anything that’s about psychology and human behaviour really gets me going, and I was excited to observe what happened as this experiment played out.

Experiments are now at the heart of much of my content. At the start of 2021, I decided to pick a different topic to test on LinkedIn each month and then write up the results for my blog and for Espresso ☕️ mailing list subscribers.

The image of my lab coat and goggles reinforces one of my Content DNA brand building blocks: being an eager experimenter. 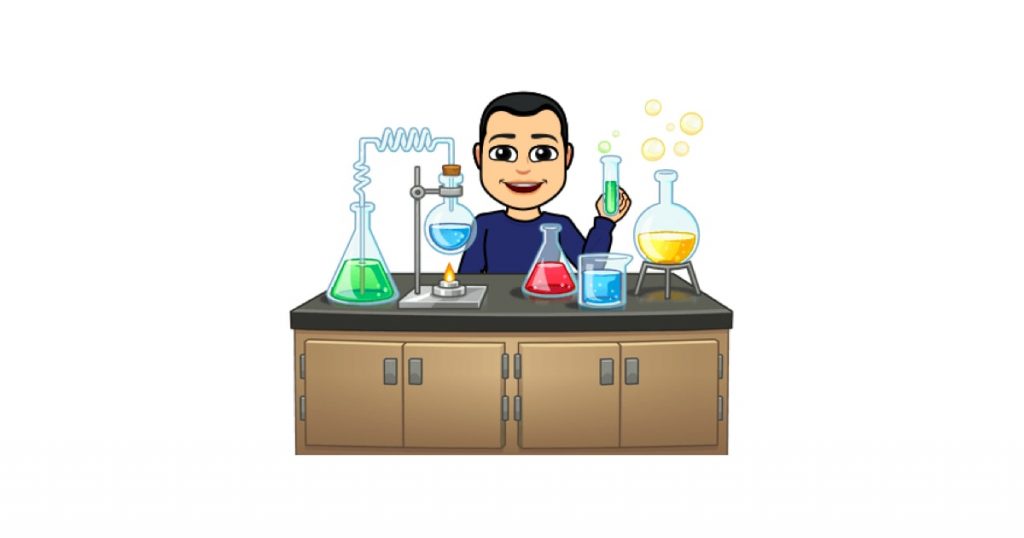 This will all take shape properly when I get my LinkedIn Lab page set up to house the experimental stuff that’s currently mixed in with the rest of my LinkedIn Learner Lounge.

The game was a bit of fun but fascinating from the psychology point of view.

And I never underestimate the power of talking to people, so doing lots of short calls with people in my network – many of whom I’d never spoken to before – was valuable to me. It will be interesting to see whether any of the conversations will lead to unexpected outcomes in the future.

If you’re doing any cool experiments in your business, I’d love to hear about them!

Be noticed, remembered and preferred. 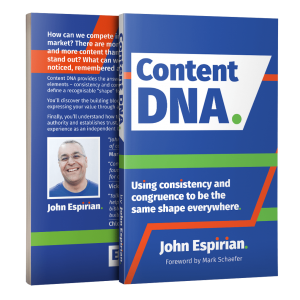 I write the words that go on B2B websites. I also offer LinkedIn consultancy and profile reviews.

Has my content helped you? Buy me a coffee.

1827 good-looking people aboard. Are you next?